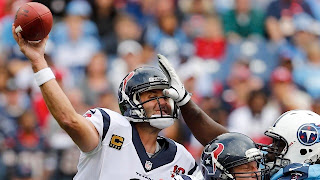 The Houston Texans continued their best season in franchise history  as they ran their record to 11-1, sacked Jake Locker six times and forced six turnovers in a 24-10 demolition of the Tennessee Titans Traitors at LP Field.

And oh yeah, they won their sixth straight game and clinched their second straight playoff trip in the process.

The Texans ran their record to a spotless 6-0 when they wear their liberty white road jerseys and swept the Titans in both AFC South Division games   They still have a pair of AFC South games left on their schedule with the surprising Indianapolis Colts that nay determine if they repeat as AFC South Division champions, but at 4-0 in the division they are well on their way to doing so.

The Texans are an unbeaten 9-0 in AFC conference games, but that is about to get severely tested.

The win over the Traitors sets up a titanic Monday night showdown at Gillette Stadium with the defending AFC champion New England Patriots that will determine whether the AFC road to Super Bowl XLVII in New Orleans runs through Reliant Stadium.   They already own the tiebreakers over the other AFC division winners thanks to wins over Baltimore and Denver and when they leave New England next Monday would like to have the tiebreaker over the AFC East champs when that game is concluded.

Well, the entire nation will get to watch and see if the Texans can handle the Brady Bunch..
Posted by Monica Roberts at 7:00 PM

Tennessee Traitors....I *love* that description of the the onetime "Memphis Oilers" whom in 1997 fled to Gnashville only to find out there was only Vanderbilt stadium to play in and played only one of two planned seasons (1997) at the Liberty Bowl Stadium in Memphis to sparse crowds. The NFL starved-fans in Memphis had no use for the Traitors (then known as the "Tennessee Oilers") and stayed away in droves. And yes I do remember growing up in Arkansas and watching the Houston Oilers on TV.