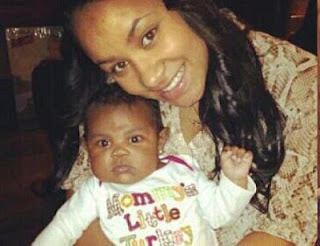 We're going to hear all about 25 year old Jovan Belcher, the Kansas City Chiefs linebacker who tragically murdered his longtime girlfriend and committed suicide in front of head coach Romeo Crennel at the Chiefs practice facility Saturday.   He'll be remembered and eulogized by his teammates from the Chiefs, his collegiate days, his high school and all the people who loved him.

But the person we haven't heard enough about is Kasandra Michelle Perkins, the 22 year old woman and mother of his three month old daughter Zoe that he killed.

I talk far too often for my tastes on this blog about the violence aimed at African-American and Latina transwomen.  But I'm also reading stories about cis women who are killed in incidents by the people they are in relationships with.

I'm sick of reading about gun violence intruding in relationships and it's one of the reasons I despise the NRA and their incessant devoid of logic prattling about 'Second Amendment gun rights'.

How is owning a handgun as Jason Whitlock pointed out in his column going to protect little old individual you against a government equipped with predator drones and tanks?

Tell that bull feces to the family, friends and parents of Kasandra Perkins, who are going to have to experience something no parent should have to go through in terms of the unexpected pain of burying their child just before Christmas.

Tell that to young three month old Zoey, who is going to grow up without both parents in her life.

Being an NFL player doesn't excuse Jovan Belcher from the deserved condemnation he needs to get for taking Kasandra's life.   I also agree with the premise that had the handgun not been available, the domestic dispute between Belcher and Perkins wouldn't have escalated into a situation in which both people are now dead and their child is orphaned.

As Whitlock said in his column, "Handguns do not enhance our safety. They exacerbate our flaws, tempt us to escalate arguments, and bait us into embracing confrontation rather than avoiding it."

And it's past time Americans get that point.  .

Here's a story from the Kansas City Star about Kasandra, whose friends wanted to make sure she didn't get overshadowed and forgotten in the crush of media coverage that the unblinking media eye will aim at Belcher.