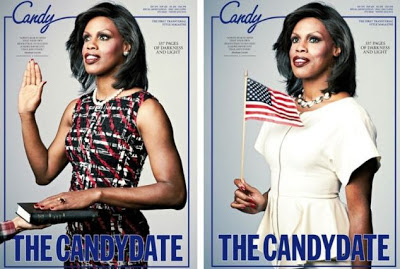 The fledgling trans style magazine Candy is only four issues old, but publisher Luis Venegas looked to 1600 Pennsylvania Avenue for inspiration for the Winter 2012 cover.

It features trans model Connie Fleming styled and made up to resemble First Lady Michelle Obama.

The split front cover shows New York based model Fleming, who worked for fashion designer and Ugly Betty stylist Patrica Field, being sworn into office and waving an American flag accompanied by the headline 'The Candydate'.

Venegas explained the rationale behind this Candy cover in a Dazed Digital magazine interview..


“I remember back in early 2007 when the Democratic Party’s nominees were narrowed down between two ‘controversial’ stereotypes never before seen for presidency: a black man, Barack Obama; and a woman, Hillary Rodham Clinton. At that time, I thought, ‘when will the time come when these archaic walls break down and the White House will be occupied by, for example, a black, transsexual woman?’”

The cover has definitely been generating some buzz and conversation on the Net and has its fans and its detractors.  I fall somewhere in the middle on this.

I'm just happy they didn't decide to do some full of fail 'edgy' cover and put a white transwoman in blackface on it.
Posted by Monica Roberts at 12:00 AM