Miss Canada Universe 2012 Is A Sistah! 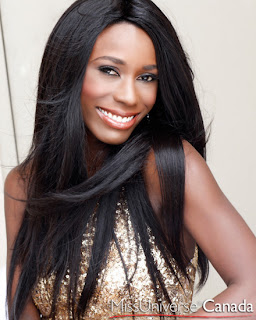 While I didn't get to see Jenna Talackova take the 2012 Miss Canada Universe crown, I'll have another reason to watch the Miss Universe pageant besides seeing if Miss USA finally wins the title for the first time in over a decade or booing Donald Chump Trump when it's televised from Las Vegas on December 19.

I'll have even more of a reason to watch in 2013.  The Miss Universe pageant system will be open to trans women, so it should be interesting to see if any trans woman wins their national pageant next year.

But back to discussing Canadian pageant developments.

If you ever wondered if the first runner up ever get to compete or move up to become the main titleholder, yes they do for various reasons.

Turns out Miss Canada Universe 2012 Sahar Biniaz due to hurting her foot days before she was supposed to arrive in Las Vegas December 2-4 for the rehearsals and the Miss Universe preliminary competition that will take place December 13, will not be able to represent the Great White North. 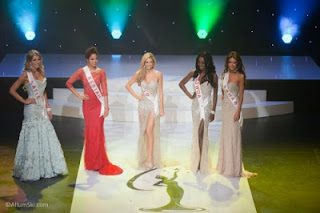 Because of Biniaz's injury, the Miss Canada Universe pageant's first runner up, 24 year old Adwoa Yamoah from Calgary will take her place as Canada's representative in this pageant.   The 1.75m beauty (5'9") will join the other 88 women from around the world competing for the Miss Universe 2012 title and be crowned by outgoing Miss Universe 2011 queen Leila Lopes..

I'll have to double check that, but I believe Yamoah also becomes the first African descended woman to represent Canada at Miss Universe.  She was born in Accra, Ghana and moved to Canada as a child.

So yep, may have to put down the Stars and Stripes and root for the north of the border contestant even though Miss USA hasn't won it since 1999.

Good luck Adwoa.
Posted by Monica Roberts at 6:00 AM