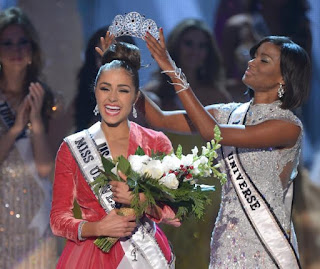 Remember back in June when the buzz and drama surrounding Jenna Talackova's participation in the Miss Canada Universe pageant was still on the minds of folks inside and outside the pageant world?

People were divided into two camps over the Miss Universe organization's decision to allow trans women to compete starting in 2013.

That drama over trans women being allowed to compete showed up during the 2012 Miss USA pageant as Miss Rhode Island Olivia Culpo, one of the five finalists this year was asked a question on the trans pageant competition issue..

Would it be fair for a person born a man to be named Miss Universe after becoming a woman?

"I do think it would be fair..." because "there are so many people who have a need to change for a happier life. I do accept that because I believe it's a free country."

Well, she went on to be named Miss USA and on December 19 became the first American in 15 years to be chosen Miss Universe since Hawaii's Brook Mahelani Lee won the title in 1997. 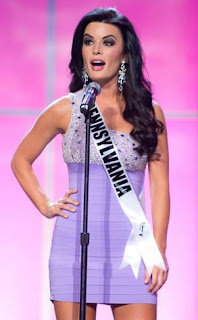 Meanwhile one of the transphobes on the other side of it, former Miss Pennsylvania Sheena Monnin, made these sour grapes tinged comments when she gave up her crown on June 5 after failing to make it into the Top 15.

"I refuse to be part of a pageant system that has so far and so completely removed itself from its foundational principles as to allow and support natural born males to compete in it. This goes against ever moral fiber of my being. I believe in integrity, high moral character, and fair play, none of which are part of this system any longer."


Miss Moral Fiber 2012 went on to put her pumps in her mouth and claim the Miss USA pageant was rigged.  Miss Universe organization officials asserted Monnin's allegations on Facebook and NBC's "Today" show cost them a $5 million fee from a potential 2013 sponsor.  The Donald sued after giving Monnin 24 hours to retract the statements.
.
The case went to arbitration and Sheena Monnin now owes the Miss Universe organization $5 million dollars after she lost her defamation suit.   A judge found she did defame the organization and awarded damages. 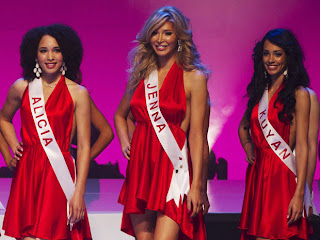 Hmm.   Let's compare and contrast shall we?   The transwoman you hated on (and by extension the worldwide trans community) made it to the Top 16 of her national pageant, tied for the Miss Congeniality award with three other women, and did so with dignity and class while having the world's media focused on her.

Meanwhile you didn't even make it out of the preliminary rounds of the Miss USA pageant and showed no class while doing so.

Jenna Talackova and Olivia Culpo have more class in their pinky fingers than Sheena Monnin has in her entire nekulturny body, and the karmic wheel has smiled upon both of them.

Meanwhile, we are observing in real time what the karmic wheel is doing unto Sheena.
.
Posted by Monica Roberts at 12:00 PM