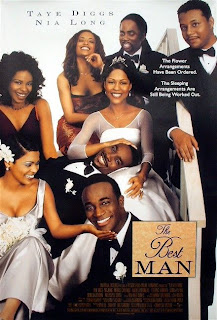 I wrote about it back in October 2011 when the news first broke that one of my fave movies, The Best Man is about to get a sequel.

After the initial burst of excitement from fans of the movie like myself, hearing that Malcolm D. Lee would be writing and directing it, and hearing the entire cast wanted to reprise their roles, all we were waiting for was the date we would need to be at the multiplex for its premiere.

Seemed like that would be a no brainer decision to greenlight it since the original movie grossed $35 million, it has a huge fanbase, and a cast made up of Taye Diggs, Nia Long, Sanaa Lathan, Terrence Howard, Morris Chestnut, Monica Calhoun, Harold Perrineau and Melissa De Souza we all want to see in some new situations post that wedding weekend.

Well, the film has finally been greenlighted by Universal and the untitled Best Man 2 sequel will be at your local multiplex on November 15, 2013.

So yeah, we'll finally get to find out what happened to Mia, Lance, Jordan, Harper, Robin, Murch, Quentin and the woman they all loathed, Shelby.

As of yet no details on the basic story or trailers have been released, but you know when that finally happens I'll post that info here on the blog.
Posted by Monica Roberts at 12:00 PM