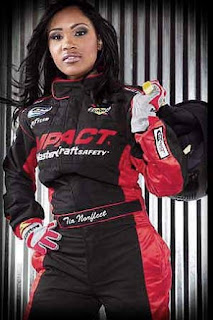 Move over Danica Patrick, there's another female driver about to hit the NASCAR circuit and she's a sistah.

Tia fell in love with racing early, and has competed in the drag racing and short track late models circuit in which she earned two top 15 finishes.

Her goal is to not only win the Daytona 500, but expand NASCAR's popularity beyond its current demographic base.  She also want to see more person of color get involved in NASCAR and become drivers, pit crew members and even engineers.


But I'll let Tia talk in this video.


Norfleet received her NASCAR racing license in August and for now hasn't released her racing schedule, but when she does, I might be tuning into a NASCAR race or two to watch my fellow Taurus' historic car number 34 compete instead of bypassing any channel that a NASCAR race is on now.