Shut Up Fool Awards-Ain't The End Of The World Edition

Today was supposed to be the day according to all the people who overhyped the fact the Mayan long count calendar ended today that the world as we knew it would end.

Yeah, right.   Only thing that happened today is the winter solstice for those of us in the Northern Hemisphere or the summer one for my TransGriot readers south of the Equator.

I'll take NASA's and astrophysicist Dr. Neil deGrasse Tyson's word about the state of our universe and 4 billion year old planet over a bunch of doom and gloom peddlers and a movie producer reading more into the Mayan long count calendar ending on this date than necessary.

So since Planet Earth is projected to be around for another several billion years until our Sun becomes a red giant, let's move on to our usual Friday business of selecting this week's fool, fools or groups of fools and shining a bright spotlight on their ignorance and jaw dropping stupidity in this week's Shut Up fool Awards.

Honorable mention number one is easy.   It goes to all you peeps who took the Mayan calendar 'end of the world' hysteria far too seriously to the point NASA was fielding calls about it.  '2012' was a movie, not a documentary.

Honorable mention number two goes to the NRA and Wayne LaPierre for pimping their usual spin lines in the wake of two mass shootings on opposite sides of the country several days apart that resulted in the deaths of 30 people, their week of silence after the Sandy Hook school one, and LaPierre having that BS press conference this morning leaving everyone no room to doubt that the NRA is nothing more than shills for the gun industry.

Honorable mention number three goes to Mike Huckabee for parting his lips to say that school shootings are happening because we have 'systematically removed God from our schools'   Guess you forgot about all those shooting that have happened either in church sanctuaries on on church grounds.. 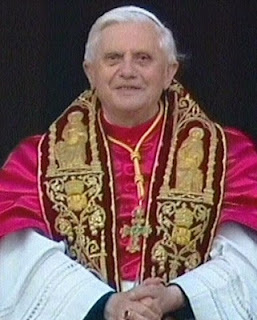 Our winner this week on one filled with an abundance of fools spouting stupid comments like the flow of feces into a sewage treatment plant is Pope Benedict XVI.

Papa Nazi opened his mouth and said in his World Day of Peace address to declare that 'gay marriage poses a threat to justice and peace'.

Really?  The one thing that consistently is a major threat to world justice and peace is fundamentalist strains of all religions and fundie religious figures pimping hatred of GLBT people.