The MLS Cup 2012 championship (re)match between the Houston Dynamo and the LA Galaxy will be kicking off in mere moments in Carson, CA

While the rest of the world's soccer media is focused on the announcement that David Beckham made earlier that this is his last MLS match of his six year run in the LA area, my Men In Orange have been without media fanfare quietly focused on their mission of bringing the MLS Cup back to Houston for the first time since 2007. 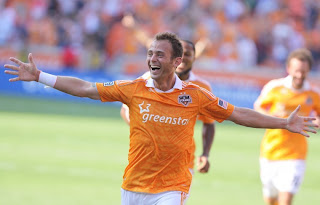 The 2012 edition of the Dynamo not only has Brad Davis back, but added Honduran Oscar Boniek Garcia to the squad and has one of the best goalkeepers in MLS in Tally Hall.

While other peeps will want a happy ending for Beckham and the Galaxy, there are a group of guys in orange shirts and their fans back in Houston who rather see at the end of 90 plus minutes the Dynamo ruining the afternoon for them by hoisting the MLS cup in the Home Depot Center after a Dynamo victory and bringing it back to H-town.
Posted by Monica Roberts at 3:00 PM