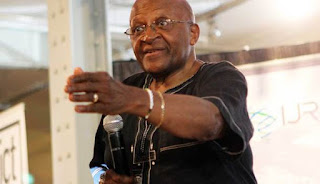 TransGriot Note: Nobel laureate and Archbishop emeritus Desmond Tutu wrote this op-ed that was originally published at the Ugandan-based  Daily Monitor    Hope they heed his words and ponder them while they are on holiday break

Uganda’s Parliament is – unbelievably – on the verge of considering a new piece of legislation that would have the effect of legalising persecution, discrimination, hatred and prejudice in that country.
Should the Anti-Homosexuality Bill be voted into law, it will criminalise acts of love between certain categories of people, just as the apartheid government made intimate relations between black and white South Africans a punishable offence.

Members of the apartheid police force charged with the upkeep of “morality” would rush into the bedrooms of suspected offenders to gather evidence, such as warm bed sheets. Those found guilty were arrested, put on trial and punished. What awaits the people of Uganda?

People have over many centuries devised all kinds of terrible instruments to oppress other people. Usually, they have rationalised their awful actions on the basis of their belief in their own superiority, in their culture, in their spiritual beliefs, in their skin colour. Thus, they argue, they are justified to hate and bomb and maim the “other”.

The anti-homosexuality legislation now under consideration in Uganda is just such an instrument. Nelson Mandela said: “No one is born hating another person.” If people are taught and can learn to hate, they can learn to love.

Many times in my life, I have been blessed to witness the innate capacity of our human family to reconcile differences. The common denominator in all these transactions is recognition that the notion of equal rights in any family, in any society, is non-negotiable. No sane person or group of people can sustainably argue that their rights should be more equal than others.

If what I am told is true, that the anti-homosexuality legislation in Uganda has widespread popular support, it should surely be the moral duty of the custodians of that country to educate its citizens about discrimination and equal rights. Surely, it should be their duty to clarify the fundamental misunderstandings in communities about what it means to be lesbian, gay, bisexual, transgender or intersex (LGBTI).

The depiction of members of the LGBTI community as crazed and depraved monsters threatening the welfare of children and families is simply untrue, and is reminiscent of what we experienced under apartheid and what the Jews experienced at the hands of the Nazis.

To those who claim that homosexuality is not part of our African culture, you are conveniently ignoring the fact that LGBTI Africans have lived peacefully and productively beside us throughout history.
I am proud that in South Africa, when we succeeded in overthrowing apartheid, we put in place a Constitution that prohibited all forms of discrimination, including discrimination on the basis of sexual orientation.

We did this because we understood that the freedom of one depends upon the freedom of all. We call it the spirit of ubuntu: the idea that I cannot be free if you are not also free.

A person with ubuntu is open and available to others, affirming of others, and does not feel threatened by others’ differences, for he or she has a proper self-assurance that comes from knowing that he or she belongs in a greater whole and is diminished when others are humiliated or diminished, when others are tortured or oppressed.

The ideology of racial superiority that was once used to justify the colonisation of our lands is part of our recent history. Today, we face a new challenge. We must overcome the notion that sexual orientation defines one’s identity or determines one’s station in life – or unjustly elevates one class of people over another.
It is with supreme sorrow that I witness, to this day, the subjugation and repression of African brothers and sisters whose only crime is the practice of love. Hate, in any form or shape, has no place in the house of God.

I urge the people of Uganda to reject hatred and prejudice.

Love comes more naturally to the human heart than hate.
Posted by Monica Roberts at 12:00 PM