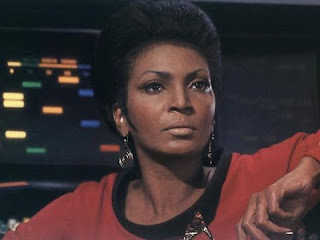 Today is the 80th birthday of iconic actress and space enthusiast Nichelle Nichols who was born on this date in Robbins, IL in 1932.

All us Trekkies know of her most famous role as Lt. Nyota Uhura of Star Trek and have heard the story of how she nearly quit the show after the first season but was convinced to stay by a Star Trek fan by the name of the Rev. Dr. Martin Luther King, Jr..

In addition to making American television history with th first interracial kiss, in the later Star Trek movies her character was subsequently promoted to Commander in the movies involving the original cast. 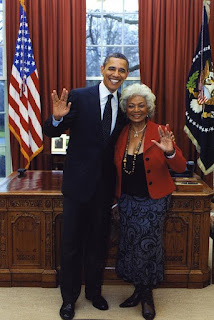 She has been an inspiration for people of my generation and subsequent ones to not only follow their dreams, but reach for the stars.

She was Dr. Mae Jemison's inspiration to become a NASA astronaut and was recruited by her during the 70's when Nichols worked for NASA as part of a program to not only encourage African-American youth to consider math and science careers but recruit women and minority astronauts.

Two of the people she recruited, Charles Bolden and Lori Garver are the current administrator and Deputy Administrators of NASA.

She has served since the 1980's on the Board of Governors for the National Space Society and is considered part of the NASA family.    She and many of her Star Trek castmates were on hand when the space shuttle Enterprise was christened.

Whoopi Goldberg was inspired to become an actress because of her and there are numerous women born in the late 60's and 70's who are named Nichelle or have it as a middle name.