What A Difference A SB 6 Free Year Makes! 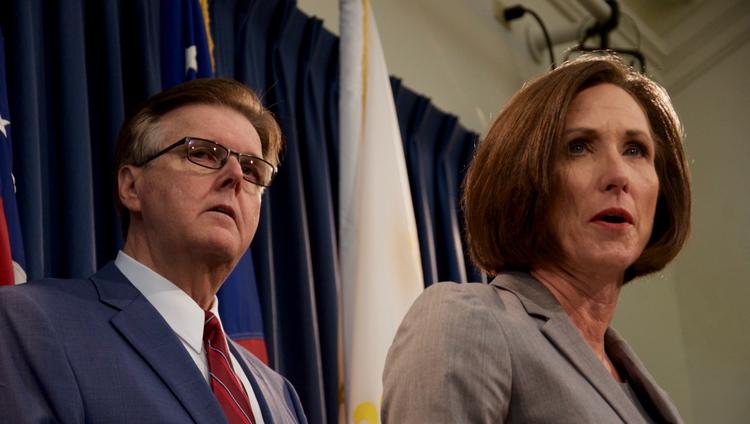 One year ago today a group of us were gathered at Houston City Hall to await a press conference from Austin in which Lt Governor Dan 'Potty Man' Patrick (R) and Sen Lois 'Locker Room' Kolkhorst (R-Brenham) , giddy over the election of Donald Trump, were there along with several Republican state senators and that sellout state senator Eddie Lucio, Jr (DINO-Brownsville) to announce the filing of the unjust anti-trans SB 6 bill.

Patrick and Kolkhorst had their say, and then we had our not only in the press conference from the City Hall rotunda along with Sen. Sylvia Garcia (D-Houston), but during the regular and Special Oppression Session.    Before that press conference I'd already had a discussion with Sen Garcia about what needed to be done along with other H-town leaders.

We said what we needed to say along with our allies, then rolled up our sleeves and got to work killing an unjust bill that no one outside the state of Texas thought we had a prayer of stopping.

We made multiple trips to Austin to talk to legislators.  We waited hours to testify in in hearing rooms that were standing room only at some points until others were opened to handle the overflow crowd of Texans from across the state determined to have their 2 minutes to testify against this waste of legislative time in the Senate SB 6 hearing. And our efforts weren't in vain.   Even though the Senate GOP majority and their sellout DINO voted for it over the objections of the rest of the Texas Senate Democrats , we were being heard, especially in the court of public opinion and most importantly by the adult legislative chamber, the Texas House.

Police chiefs across the Lone Star State spoke out against it along with business leaders.   Progressive pastors spoke up to counter the white fundamentalist ones in favor of oppressing trans Texans.  Parents of transgender kids and our allies.

And the most important voices saying no to SB 6 were Texas House Speaker Joe Straus (R-San Antonio) and Rep. Byron Cook (R-Corsicana) the chair of the House State Affairs Committee.

Thanks to these two Texas Lege grownups, SB 6 never got a hearing in the House, and far right Republicans, upset about that development, floated a substitute bill that did get a hearing. Once again the Texas trans community responded and spent the entire day at the Texas state capitol waiting until the hearing kicked off in the wee hours of the morning to express their displeasure with this attempt to legislate discrimination. The regular session came to a close, SB 6 and HB 2899 were dead, and we could exhale for a moment until the expected Special Oppression Session was announced.


Once that happened, we rolled up our sleeves and got to work on killing SB 6, now renumbered as SB 3 in its revived attempt by Patrick and Kolkhorst to pass it during the Special Oppression Session.

Just as in the regular session, the Texas trans community handled its business and said in a collective loud voice NO to SB 3, and repeated that NO during the Senate hearing held for it. Once again the Texas Senate passed it over the objections of Senate Democrats like Sen Garcia, and once again, thanks to Straus and Cook,  it was DOA in the Texas House until the special session ended 30 days and $800,000 taxpayer dollars later.

But the bottom line is a year later, SB 6 is still dead, and we have a chance to punish at the polls all who attempted to push through that legislative oppression.

And the most important thing to point out is the Texas trans community won.   We stopped SB 6 and it NOT law in the Lone Star State.