Monday will be what would have been the 89th birthday of the Rev. Dr. Martin Luther King, Jr.    This year the federal holiday to honor the Nobel Prize winning human rights advocate we lost far too soon also falls on his January 15 birthday

One of my favorite Dr. King quotes is this one:  'Nothing in all the world is more dangerous than sincere ignorance and conscientious stupidity.'

That is why it gets called out every Friday on this blog.   It's also time for me to get busy and start calling it out.

Honorable mention number one is Rachel Campos-Duffy at FOX Noise.   While on the show Outnumbered she complained that people who leaked the Trump  s***hole comment 'make our country look bad'.

It's called 'journalism'  A concept that is foreign to you network ..

Rachel,  that 'making our country look bad' battle was lost on November 9, 2016 and every miserable day that you and your propagandists at FOX Noise try to defend his racist behind.

Honorable mention number two is French actress Catherine Deneuve, who said that the #MeToo movement 'has gone too far'

Honorable mention number three is VP Mike Pence, who had dinner with a fundie evangelist who prayed for the death of Liberal SCOTUS justices

And FYI, you know the last time you conservafools did that, you lost Antonin Scalia.

Honorable mention number four is a group award for all you fauxgressives screaming not even 24 after a well received Oprah speech during the Golden Globe Awards that 'she's not qualified to run for president.

Your anti-Blackness is showing on that one.    And FYI, after having an exceptional Black president in office from 2009-2017, y'all should be tired of disastrous white male Republican ones

First point I want to make is, it's NOT 2020 yet.   We haven't even got past the 2018 midterms.
Second, Oprah has declared she's running.  She's only thinking about it.
Three,  The not qualified to run bar got lowered big time when you white peeps put the massively unqualified white man in office versus the supremely qualified for the office white woman.

This week's SUF loser  winner is Donald Trump.   45 embarrassed the nation and caused another diplomatic crisis by racistly referring to Haiti and other African nations as 's***hole countries." 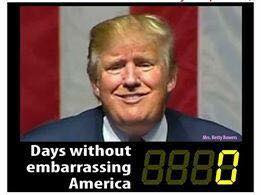 Then he tried to cover up the firestorm he'd created by signing the MLK Day proclamation.   We peeped your racist game a long time ago 45.   You ain't fooling nobody in woke Black America with this crap.

You and your party are turning the America we once knew into a s***hole country noone wants to visit, emigrate to or live in.

Donald Trump, shut the hell up fool!
Posted by Monica Roberts at 12:00 PM