Note To Nikki Haley: All Music Is Political

Laughed my azz off at Nikki Haley's comment complaining about politics at the Grammys and saying that music and politics shouldn't mix.

I also find it more interesting the critique coming from Haley in light of the fact that one of the first things that GOP administrations do is cut funding to arts, music and education,

She was also born in 1972, when the music industry was blowing up.   The 70's and the 80's were one of the most creative and unapologetically political periods for popular music. 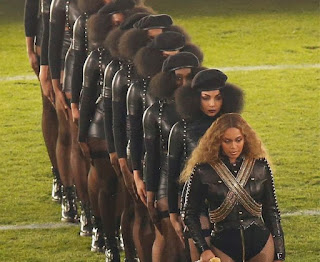 News flash for you Nikki. Art, music and politics have been joined at the hip.    Some of my fave songs have had political themes in them like Stevie Wonder's 'You Haven't Done Nothing' slamming the Nixon Administration.   In fact Stevie has written a lot of politically themed songs over his distinguished career..   Billie Holiday's 'Strange Fruit'.  Sly and the Family Stone.  The Isley Brothers 'Fight The Power.'   The Impressions 'Keep on Pushing' which was inspired by the civil rights marches of the era.    Freda Payne's 'Bring The Boys Home'  critiquing the Vietnam War.   Edwin Starr's 'War'.  Various Parliament-Funkadelic songs.  Harold Melvin and the Blue Notes 'Wake Up Everybody.  George Clinton's 'Bullet Proof/, Public Enemy's Can't Truss It.  NWA's F*** tha Police.  Beyonce's' Run The World'

And that's just from the R&B, rap and hip hop side.   Black music has always been unapologetically political    Music of other genres has also been political like Men At Work's 'It's A Mistake' and Nena's '99 Luftballons' being two examples on the same theme of an accidental nuclear war.

So it's laughable that you, being part of a misadministration that politicizes everything including NFL players simply taking a knee during the national anthem protesting police violence against our community and turning it into something sinister, are now whining about the Grammy Awards and the numerous political shots they took at your reprehensible boss up to and including Hillary Clinton reading from Fire and Fury..

So just deal with the fact that all music is political, and thanks to the First Amendment to our Constitution, here will be more musical critiques of your boss coming over the next two years
Posted by Monica Roberts at 12:00 PM