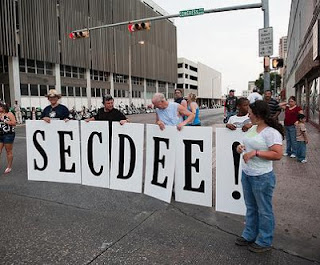 “[The] answer is clear. If there was any constitutional issue resolved by the Civil War, it is that there is no right to secede.”-SCOTUS Justice Antonin Scalia

I know many of you folks who love to bash Texas at every opportunity have heard the repeated cries of Texas Teapublicans to secede from the United States and are loudly egging them on to do so.

And yes, another Texas Republican has called for a secession vote during their upcoming 2016 presidential primary that thankfully failed Saturday.   But let this native Texan point out why secession isn't likely to happen. 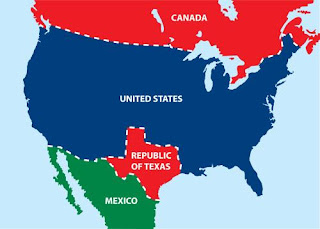 Major reason number one is while the idea is popular with the Tea Party ignorati, the national Republican Party doesn't.  75% of reality based Texans oppose it, and especially non white Texans like myself.

I like being part of the USA.   That way I still get the Social Security benefits I paid into the system for along with  Medicare, Medicaid, and all the other things I'm eligible as an American for.

These Tea Klux Klan clowns probably haven't heard of a 1869 SCOTUS case called Texas v. White which stated the Constitution didn't permit states to unilaterally secede from the Union, and ordinances of secession were absolutely null and void.

A Texas secession happens, and the GOP immediately loses those 38 electoral votes and can kiss any chance of regaining the White House goodbye since they have a narrower electoral vote path to the presidency.  There will also be 25 less GOP House seats, 11 less Democrats and two less GOP Senators.

Then there's the other fiscal costs.  An independent Texas would now have to maintain that 3,240 miles of interstate highway that crisscross our state and come up with the funding to do so.

The Republic of Texas would have to set up embassies and consulates in the nations that recognized it, customs facilities in Texas ports and airports, border checkpoints and create a military to defend its long borders with Mexico and the USA. All those nation building tasks cost money.

Other questions that come to mind is what is the Texas share of the US national debt?  What happens with the Strategic Petroleum Reserve locations inside our state's borders?

Naw Tea Klux Klan boo boos, all that military equipment at the current military bases in this state like Ft. Bliss and Ft. Hood for example, would go back to the US or have to be bought from the feds at a steep price.

Teapublicans would also find out the hard way that Texas receives far more in federal money than it sends to the feds, and with the US federal fiscal spigot cut off, the Republic of Texas would have to make up that lost revenue somehow.  So say hello to your taxes going up, paying taxes to the federal government in Austin and not getting the level of services you get now.

Let's be real, much of this racist Texas secession talk has only cropped up because the current POTUS shares my ethnic background, our state since 2009 has had a predominately non-white majority and Latinos will become the Lone Star State's largest ethnic group starting next year.

In the USA, we persons of color at least have a Constitution with some protections of our human rights.  I'm not guaranteed of the same thing in a Teapublican run Republic of Texas.

And yeah, we already tried the independence thing and failed at it, which is why we sought to become a US state in 1845 after a decade of it from Mexico.

That's just the short list of reasons why I don't see a Texas secession happening, and I chuckle when the Texas GOP pushes that non-starter idea.