Been hearing the mounting bad news that trans actress, icon and Warhol muse Holly Woodlawn was ill with cancer, and her health had been deteriorating for the last few months.

Woodlawn in addition to being a girl like us, was the inspiration for the Lou Reed song Walk On The Wild Side, and her life was chronicled in the 1991 documentary A Life In High Heels.

She was born in Puerto Rico in 1946 and raised in Miami Beach, FL.  She ran away from home and hitchhiked to New York, linked up with Andy Warhol and became one of his superstars.


Woodlawn starred in the 1970's underground classic movies Trash (1970) and Women In Revolt (1972) along with performing on the New York and Los Angeles cabaret circuits.. 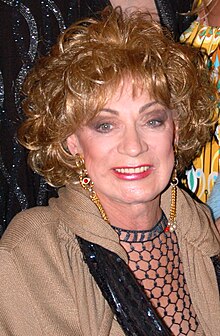 While Woodlawn received critical acclaim for those film roles, she struggled to turn it into mainstream success and moved back to Miami in 1979.  She did make a comeback into public consciousness starting in the 1990's with the rise of queer and independent films, and most recently had a role on the show Transparent.

Rest in power and peace, Holly Woodlawn.
Posted by Monica Roberts at 7:00 PM