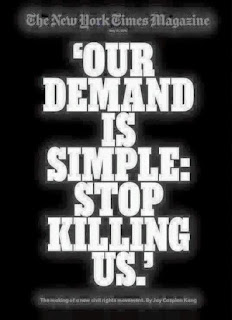 In the wake of once again, another white district attorney failing to indict a white police officer in a death by po-po killing of a Black person, this time in the wake of killing Tamir Rice in Cleveland, I was asked what are my thoughts about what has been happening.

I'm tired of seeing the non-indictments happening and vanillacentric privileged people racistly trying to justify it.

I'm going to link to another post from Ashton Woods' Strength In Numbers' blog that says it more eloquently than i can right now about this subject.

The United States has always been a society that generally treats African Americans as less than second class citizens and often less than human. History is right now, MF! Any elementary level knowledge of and understanding about the historically white supremacist and violent culture of the United States of America would help the willfully ignorant get it, get it? Or are you suffering cognitive dissonance? That's it, but it makes you complicit if that ugly hat fits! Duck fat! Get your mind right and you don't have to wear it...