10 Things You're Saying When You Ignore Someone's Gender Pronouns 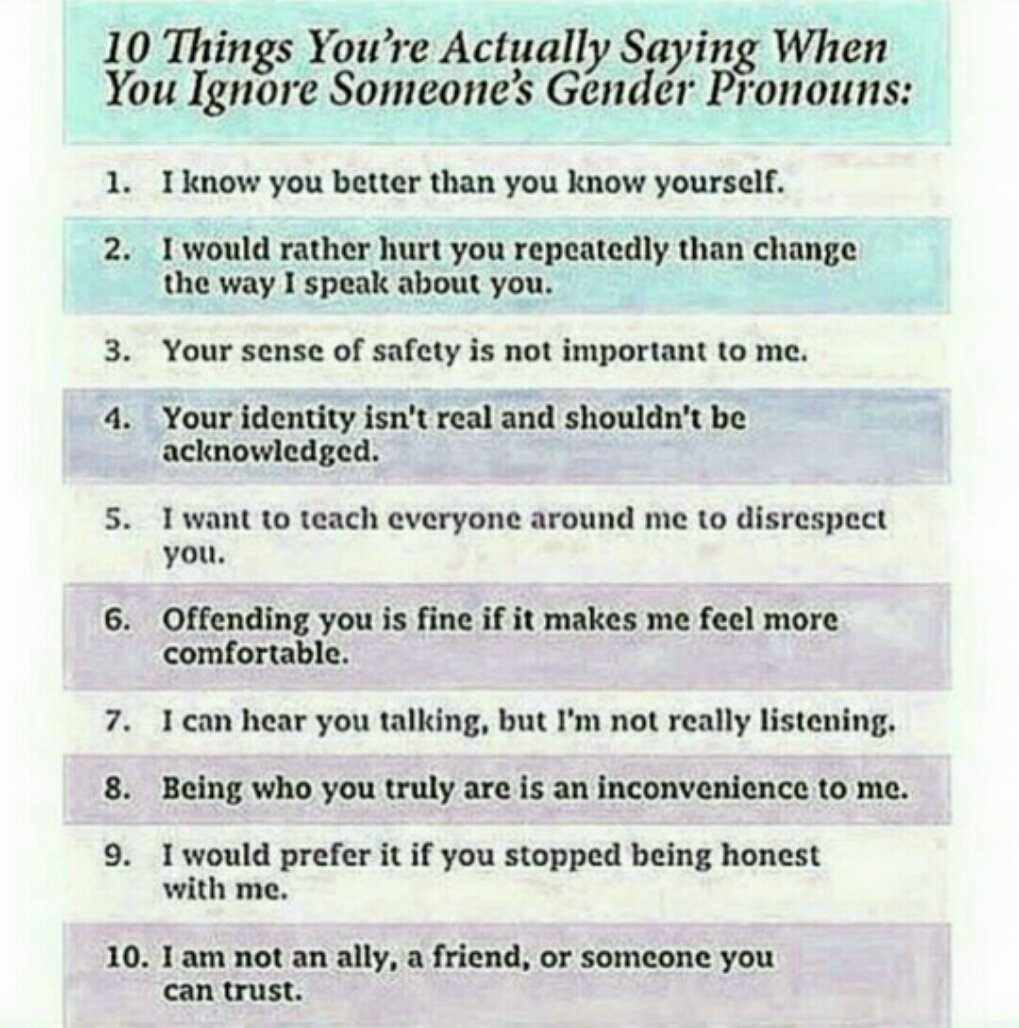 One of the quickest and easiest ways to show a trans person that you respect them is to use their preferred pronouns.  But there are people who for various reasons, either continue to use the wrong pronouns to the irritation of the trans person in question or willfully do so.

I like this meme, and while I didn't create it, I visualized its ten points as a way to expound on the importance of cis folks using the  pronouns that match our gender presentation,

When you're done reading it, I want y'all to realize that when you deliberately fail to recognize a trans person's preferred pronouns, it is taken by the trans person as a sign of blatant disrespect. You are also  subliminally sending a message to the trans person in question you don't care about or recognize them as the |human beings they are now.

1.  I know you better than you know yourself

We see this smug attitude crop up far too often in social media and elsewhere.

Naw cis homies and homettes, you don't.  Neither do you have the ability to tell what my chromosomes are or figure out my trans status just by looking at me.  Just get it through those skulls that trans men are men, trans women are women.

2.  I would rather hurt you repeatedly than change the way I speak about you.

We understand in Trans World that it takes time for family and friends to get used to your transition. But when we're pushing five, ten, twenty years post transition and you still are misgendering and deadnaming the trans person in question, you're being a microaggressive azzhole

3.  Your sense of safety is not important to me.
This is a pet peeve of many trans people, and especially trans women.  When you cis women mad because a trans woman is performing femininity better than you in the 'hood or the club sashay over to the cis male she's talking to or is making goo goo eyes at her and whisper 'That's a man' in his ear, you are setting that trans woman up not only for a hate crime, but legal trouble for yourself if the trans woman gets hurt or killed.  Some of us trans women just got it like that, so chill with that shady (and dangerous) crap.

And it's not cool to do this to a trans man either.  It opens them up to a beat down or worse.

4.  Your identity isn't real and shouldn't be acknowledged.

I don't care what your pastor, the TERF's, the GOP or other assorted haters said, a trans person knows their gender identity better than you and you need to respect and acknowledge that.  If you can't, as far as we trans peeps are concerned, you aren't a decent human being.

5.   I want to teach everyone around me to disrespect you.

The TERF's have been trying to do that since 1973 and now the right wing trans haters are doing so for political purposes.  They will fail because of the increased visibility of trans people.

6.   Offending you is fine if it makes me more comfortable.

When you are willfully offending me for your own selfish reasons, don't get mad when I diss you or start crying foul when I call you out for being a transphobic azzhole.

7.   I can hear you talking, but I'm not really listening.

And if you're not listening, then what's the point in me trying to educate you on my issues or tell you my trans story?

8.   Being who you truly are is an inconvenience to me.

I've spent a lot of time engaged in hard solid thinking about being trans, lots of money, and gone through hell to be me.  If it's an inconvenience for you to respect that and use the correct pronouns, then you need to step out of my life.

9.  I would prefer it if you stopped being honest with me.

If you can't handle my trans truth, buh bye.   Can't help it if you're insecure about your own gender identity or being our unapologetic selves bothers you.

We don't need toxic frenemies in our lives because we get enough crap from the rest of the world about our lives or who don't have our backs.  There are others out there who are loving and kind enough to be ride or die friends for us, and those are the people I'd rather spend time with.
Posted by Monica Roberts at 12:00 PM