Who Dat Going To The NFC Title Game? 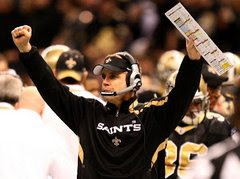 The Superdome has hosted many historic events since it opened in 1975. It has hosted six Super Bowls, three NCAA Mens Final Fours, the 1988 Republican Convention, a mass by Pope John Paul II, is the host stadium for the Sugar Bowl, several BCS Title games, and the annual Bayou Classic tilt between Grambling and Southern.

But next week it will host its first ever NFC Championship game as the New Orleans Saints blasted the Arizona Cardinals 45-14 to earn their second trip ever as a franchise to the NFC title game. The Saints will play the winner of the Dallas Cowchips-Minnesota Vikings game later today.

The Saints are the number one seed in the NFC playoff bracket, which means the NFC road to the Super Bowl goes through them if they keep winning. But Who Dat Nation was a little nervous about the fact that the Saints came into this playoff game after the bye week with three straight losses in their final NFL regular season games. Twenty seconds into it they found themselves trailing 7-0 after a 70 yard touchdown run by Tim Hightower stunned the raucous Who Dat Nation Superdome crowd into nervous silence.

The Saints struck back with three consecutive touchdowns in 6:36 to forge a 21-7 lead. Arizona scored another touchdown early in the second quarter to narrow the Saints lead to 21-14, but a 44 yard bomb to Devery Henderson followed up by a two yard pass to Marques Colston broke the game open. 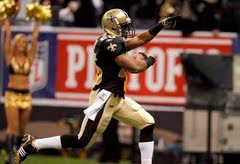 Reggie Bush added to an already stellar day with a third quarter 83 yard punt return for a touchdown to close out the scoring. Bush had 84 yards and a touchdown rushing, 24 yards receiving and 109 yards on three punt returns.

Ever since coach Sean Payton arrived in New Orleans, the Saints have cast aside their lovable losers image and have been building toward elite NFL team level status. The Saints are one of five NFL teams who have never played in the Super Bowl, and this win put them one step closer to earning a trip to Miami and scratching their names off that list.

Geaux Saints!
Posted by Monica Roberts at 10:40 AM