Being Transgender In Prison Should Not Equal Torture 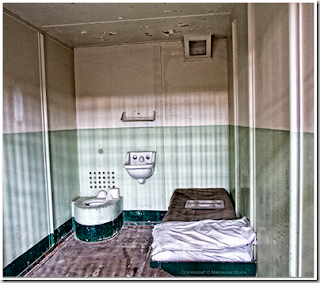 TransGriot Note: This a guest post from the remarkable Renee of Womanist Musings.

Maria Benita Santamaria was sentenced to prison after she was arrested with ten pounds of meth. Clearly, this is against the law, however; she did not deserve to be tortured, sentenced to a men's prison and denied medical care. Her story is not unique, in fact the prison industrial complex is not equipped properly to house transgender criminals.

Maria was placed in solitary confinement where she was denied hormone treatments and thus began to grow facial hair. According to the Washington Examiner she was even referred to as “it”. She was treated no differently than any other person in solitary confinement, despite doing nothing to earn this treatment other than being a trans woman. She was placed on lockdown 23 hours a day and allowed a shower once every three days.

The following is an excerpt from an interview with CSC's Craig Haney, a psychologist who's an expert on long-term solitary confinement.

First let me note that solitary confinement has historically been a part of torture protocols. It was well-documented in South Africa. It's been used to torture prisoners of war.

There are a couple reasons why solitary confinement is typically used. One is that it's a very painful experience. People experience isolation panic. They have a difficult time psychologically coping with the experience of being completely alone.

Some of them lose their grasp of their identity. Who we are, and how we function in the world around us, is very much nested in our relation to other people. Over a long period of time, solitary confinement undermines one's sense of self. It undermines your ability to register and regulate emotion. The appropriateness of what you're thinking and feeling is difficult to index, because we're so dependent on contact with others for that feedback. And for some people, it becomes a struggle to maintain sanity.

That leads to the other reason why solitary is so often a part of torture protocols. When people's sense of themselves is placed in jeopardy, they are more malleable and easily manipulated. In a certain sense, solitary confinement is thought to enhance the effectiveness of other torture techniques.

The prison industrial complex is overburdened and the US has one of the highest incarceration rates in the world. Once someone is imprisoned, often the larger society fails to recognize their humanity and they are subject to treatment that is abominable. If the person in question is part of an already socially marginalized group, the negligence and cruelty often escalates. After six months in solitary, daily being misgendered, and denied medical treatment, is it any wonder that Maria Benita Santamaria contemplated suicide?

H/T The Bilerico Project.
Posted by Monica Roberts at 6:00 AM