Now y'all know I wasn't going to talk about the USA 'Menz' basketball team and the upcoming FIBA World Championships in Turkey without talking about the women's tournament since it's taking place this year as well.

Hey if we don't care about women's sports, especially at the international level, who will?

The FIBA World Championships for Women will be contested in the Czech Republic from September 23 to October 3. Unlike the men's championship, only 16 nations are competing.

The various national organizations have expessed a desire to expand the number of teams to 24, given that women's basketball is becoming more popular internationally and give more teams a chance to compete for the title. 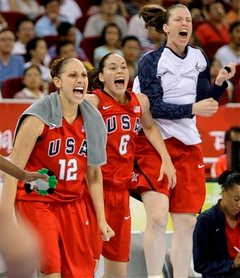 For now FIBA is keeping the women's tourney at 16 teams. One automatic qualifying slot slot went to the 2008 Olympic Champion USA, the other to the host Czechs. The other 14 teams qualified through their various FIBA regional zone tournaments.

The draw for the women's tournament was held in Karlovy Vary on November 24, the city hosting the final rounds of this year's tournament. The Group play and second rounds will be contested in Brno and Ostrava.

Here are the Groups for the 2010 FIBA World Championship for Women.

After round robin play is completed, only the top three teams in each group will advance to the second round. They will form two new groups, Groups E and F

The top four teams in Groups E and F will advance to the knockout eliminations in Karlovy Vary to determine the 2010 FIBA Women's world basketball champion.

Our northern neighbors qualified on the FIBA women's side, and will be playing in Group A. Canada has a tough opening game September 23 against the 2006 defending FIBA women's champion Australians.

Meanwhile, the 2008 Women's Olympic Champions are in Group B and on September 23 will take on Greece in their quest to reclaim the FIBA crown for a record eighth time. 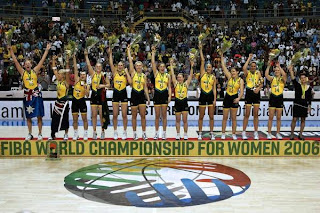 Team USA was unbeaten and cruising to another basketball confrontation with the Aussies until the Russians upset Team USA 75-68 in the semifinals and ended their chance at a FIBA World Championship threepeat.

The Opals then demolished the Russians 91-74 to take their first FIBA title while a stunned Team USA regrouped and blew out the host Brazilians 99-59 for the bronze medal.

Head coach Geno Auriemma and his staffs mission will be threefold. He has to return Team USA's women to FIBA golden glory, retool with the next generation of outstanding women players and prep for the 2012 London Games.

Unlike the men, the Number One FIBA ranked Team USA women have been kicking butt and taking names at the international level since 1996, have won this event seven times, and taken four out of the last six.

The final USA women's team lineup hasn't been set yet, but we already know it will be a team in transition with longtime center Lisa Leslie retiring from international competition after the Beijing Games.

While it would be a longshot, I'd be thrilled if my Houston homegirl and Baylor freshman phenom center Brittney Griner ended up making the trip to the Czech Republic. Frankly, with all the talent at center I see her either on the Youth Olympic Games Team, a Pan Am Games team or maybe the 2016 Olympic team in Rio.

Whoever ends up on the final roster, it will be fun to watch. The winner also gets the automatic bid for the 2012 London Games.
Posted by Monica Roberts at 12:20 AM