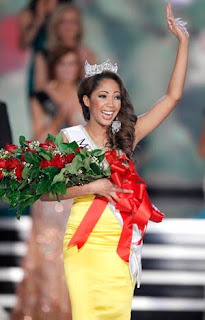 I was flipping through my 800 plus cable channels last night and happened to tune in just in time for the semifinalists to be whittled down to the young woman who will wear the Miss America crown for 2010.

For the first time since 2004, it will be an African American woman that will do so. It's deliciously ironic it happened on the night that America's Bigot, Rush Limbaugh was one of the judges this year.

One of the other judges for this year's Miss America pageant was Vivica A. Fox, who probably canceled out Rush's foolishness. 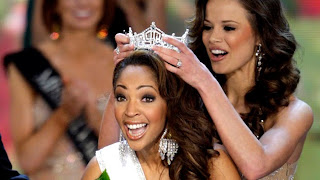 In case you're wondering, there have been seven African-American women who have become Miss America in the 88 year history of the pageant. African-American women didn't start entering the pageant until 1970, and Vanessa Williams broke through to become the first African descended Miss America winner in 1984. Suzette Charles, the first runner up that year finished out Williams' reign after she resigned due to fallout from a nude photo scandal.

Congratulations to Caressa and may she have a quiet and drama free reign as Miss America 2010.
Posted by Monica Roberts at 12:00 PM