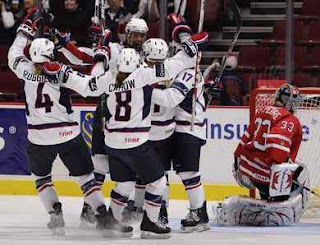 The Vancouver Winter Olympic Games will be starting February 12, and Renee's finally starting to get Olympic fever since the torch run passed within two blocks of her house.

One of the many things we have in common is that we are big women's hockey fans. Of course, she's Canadian and it's their national sport.

We've had some good natured trash talking going on about which one of our squads will take home the women's hockey gold from Vancouver. Canada and the United States have been the two best teams on the international women's hockey competition scene and the rivalry is an intense one. 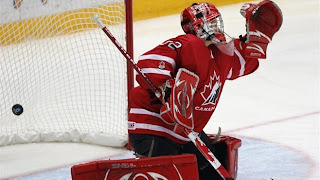 Both teams are in separate pools, so barring upsets, they will meet in the gold medal match. And as you can see, the trash talking is only beginning.

May I remind you Renee and all proud Canadians, when women's hockey was first contested as a medal sport at Nagano in 1998, we beat Team Canada twice to skate away with the first gold ever awarded in Olympic competition. 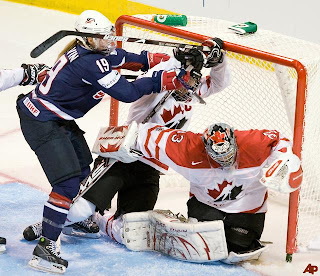 The 2010 USA women's Olympic team has been selected. There are six Olympians on that squad including Angela Ruggiero and Jenny Potter, who were on the 1998 Nagano gold medal squad.

My girls will be training hard to make sure that gold medal comes back to the States with them. Yeah, we definitely haven't forgotten Salt Lake 2002 and owe y'all an Olympic butt kicking y'all so richly deserve.

I have already composed a special version of the Canadian National Anthem I will post to TransGriot when the Olympic tournament is over and the Stars And Stripes is being raised above the Canadian flag to the rafters of GM Place. 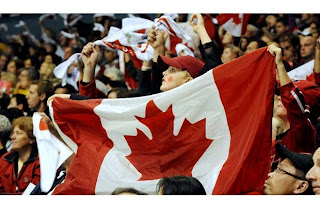 (singing to tune of the Canadian national anthem)
Oh Canada,
Your fans will get to see
Your women lose
The gold in women's hockey

You'll see the rest of it on February 25. FYI, that's the date the women's Olympic hockey gold medal game will be contested.