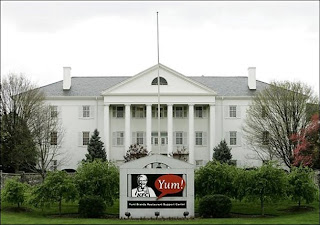 Yum Brands, Inc. is the parent company for Kentucky Fried Chicken and is headquartered here in Louisville Metro.

That means that we've been getting visits on the regular by the boys and girls from People for the Ethical Treatment of Animals.

In addition to picketing various KFC locations and Yum Brand, Inc. headquarters, they even showed up to picket Sunday services at the massive Southeast Christian Church, where some of the Yum Brands execs worship.

PETA asserts that KFC's chicken processing methods are cruel and harmful to our future Original Recipe pieces. Even if that's true, PETA as usual has done their usual stellar job in alienating supporters and pissing people off to the point in which many of us who are sympathetic to the cause stopped caring what PETA had to say a long time ago.

PETA's in Da Ville threatening to sue the city over their stalled request to erect for three months a five and a half foot tall statue of a bloodied chicken on crutches. 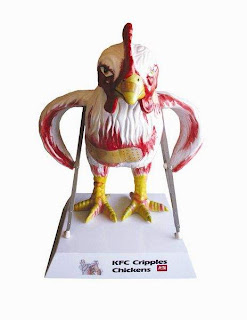 PETA wants to put it downtown on the corner of Fourth and Market Streets. The statue was created by New Yorker cartoonist Harry Bliss and reads at its base 'KFC Cripples Chickens'

Martina Bernstein, PETA’s litigation attorney, wrote a letter to James Mims December 17 stating metro government’s denial of a permit for the display is bogus and doesn’t “survive even the mildest scrutiny.”

“Accordingly, PETA respectfully requests that you exercise your authority to reverse the (Department of Codes and Regulations’) decision on the grounds that it is baseless and order the department to issue the requested permit forthwith.”

James Mims, the director of the Department of Codes and Regulations, wrote a December 28 letter saying PETA did not pay its $25 application fee and gave the city no “site map” of the proposed location of the statue.

“All I want to do is make sure that whatever we’re doing in the way of permitting this object recognizes required exits and entrances into buildings, doesn’t disrupt emergency services, allows for passable pedestrian areas in front of the buildings, and does not create a hazard that would impede pedestrian travel.”

He also stated in a Courier-Journal interview that PETA’s application was never denied and the application will be processed as soon as they receive the site map required by city ordinance.

PETA claims it has already done so, and the city is just stonewalling them.

PETA applied for a similar permit in July, but no decision was made because the city instituted a moratorium on temporary structures in public rights of way until new rules could be written.

Those new requirements say groups putting up a temporary structure must get adjacent property owners’ permission before the display can be approved by the city.

KFC spokeswoman Laurie Schalow told The Courier-Journal that that the request was a "despicable publicity stunt that we hope the city will have the good sense to disapprove."

At any rate, if and when it goes up, I'll be making a beeline once again for the closest KFC and have a picnic with a bucket of original recipe in front of the statue in question.
Posted by Monica Roberts at 2:18 PM