Goodbye Mary Daly-And Please Take The Transphobia With You 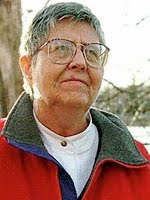 One of the major reasons I don't like radical feminism is the virulent transphobia that was espoused by the quartet of Sheila Jeffreys, Janice Raymond, Germaine Greer, and the woman that died January 3, Mary Daly.

While Daly was a brilliant thinker, she was controversial to put it mildly.

She once advocated that only ten percent of the men on Planet Earth should be left alive, and refused to allow men in her women's studies classrooms at Boston College.

She was called out by womanist Audre Lorde for her racism in Lorde's famous May 6, 1979 Open Letter To Mary Daly. 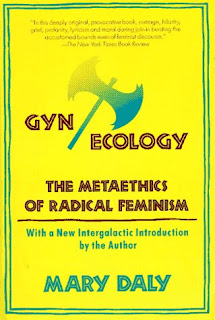 Lorde criticized her for failing to address race or acknowledge the stories of women of color in Daly's 1978 book Gyn/Ecology.

Daly's transphobia was in full effect in Gyn/Ecology as well when she referred to trans people as "Frankensteinian" and living in a "contrived and artifactual condition".

“Although the resistance Mary Daly’s feminist theology offered to patriarchal oppression is commendable, a spirituality that elevates one’s own kind by demonizing an ‘other’ – as hers did for transgender/genderqueer folks – is ultimately one for which I have no sympathy,” said transgender activist and historian Dr. Susan Stryker. “Her moralistic condemnation of transsexuals as death-loving Frankenstein monsters was a powerful impetus for my own efforts to reclaim the transformative power of the monstrous and refute its stigma for trans people.”

You can read the rest of the Mary Daly post there.
Posted by Monica Roberts at 3:30 PM