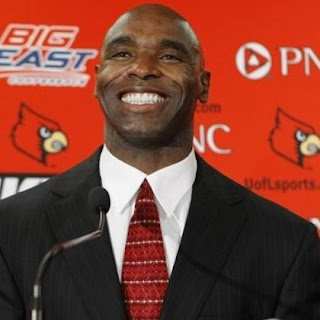 Over the last few years, there has been a marked increase in the numbers of minorities getting the head coaching jobs at NCAA Football Bowl Subdivision (formerly Division 1) schools. I'm proud to say my alma mater, the University of Houston is one of them.

But the interesting trend that has happened lately on the NCAA African-American head football coaching front is transpiring in Kentucky.

There are three schools in this state, Louisville, Kentucky and Western Kentucky that play at the FBS level. With the recent elevation of offensive coordinator and UK alum Joker Phillips in the wake of the retirement of Rich Brooks, U of L's hiring of Florida defense coordinator Charlie Strong and the hiring of Hilltopper alum and Stanford assistant Willie Taggart at WKU, the state of Kentucky's FBS football programs are all headed by African-Americans.

That means out of the 12 African-American head football coaches in the FBS, Kentucky is home to one quarter of them. 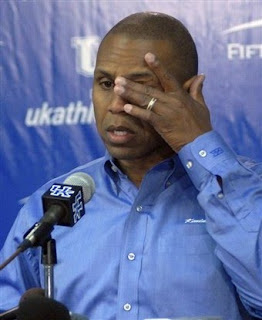 In addition, Joker Phillips' elevation to the position makes him only the second ever African-American head football coach in the SEC. Sylvester Croom broke that barrier when he was hired by Mississippi State in 2004 and held the position until he resigned at the end of the 2008 season.

Kentuckians are taking football as seriously as they do King Basketball in light of the fact these three programs have been making competitive noise.

The Wildcats have been steadily building the foundation since the arrival of Brooks and have become competitive in the SEC East, the toughest division in college football.

The Cards won a BCS bowl in 2005 as Big East champions but have slipped from that elite level. 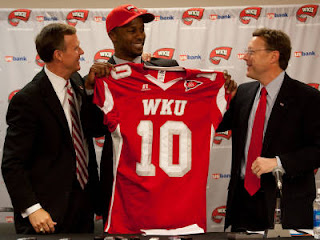 It's great to see that all three institutions have decided to have these well qualified gentlemen run their programs. Strong was defense coordinator for the NCAA Champion Florida Gators. Phillips has been the offensive coordinator for the Wildcats. Taggart was an assistant coach at WKU for a decade before he moved on to Stanford.

It's even more gratifying to see in Phillips' and Taggart's cases former players who have been given the opportunity to coach at their alma maters. In Taggart's case he is one of only four WKU players in the 91 year football history to have their jersey number retired.

May all three have much success leading their respective programs to the next level of development in the future, unless they're playing Kevin Sumlin and my Cougars.
Posted by Monica Roberts at 12:20 PM