“It’s time for us to organize, gather together the clusters of African-American transwomen around the country who are doing positive things in their various communities and talk to each other. We need to befriend and bond with each other. We also need to immediately band together locally while thinking and acting nationally and globally with our transsisters around the world“.

I'm envious of the fact that our Asian and Pacific Rim transsisters just formed an organization to do the advocacy and informational dissemination for transpeople across that region.

I would love to see the same thing happen for African descended transpeople, and I'm wondering out loud what's holding us back from doing so? 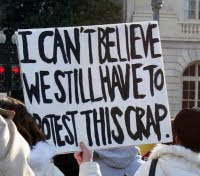 Yeah, I know we have a lot of issues in the African descended community to deal with. We are taking the brunt of the anti transgender violence plaguing the transgender community as a whole. We have employment issues to deal with. We have faith based haters in our midst that refuse to understand that just because we transitioned does not mean we stopped being Black people concerned about the issues that affect it.

We have medical-health care issues. We have people that feel isolated, powerless and alone. We have self esteem and pride issues that must be addressed.

But addressing those issues and getting to the point where we can solve them will take concentrated teamwork and effort from all of us across the country.

Yes, it will be difficult. There will be disagreements on just how we go about doing it. But do it we must.

The status quo we've been muddling along with for decades is no longer acceptable. We must take charge of our destinies in this decade and not let others speak (or not speak) for the African descended trans community.

For that to happen, it's going to require hard solid thinking, short and long term strategic planning and sustained work it's going to take to make that happen,

If we're not quite ready yet to tackle that project, then my suggestion would be to use the African American Transsisterhood Initiative as a starting point to build a cohesive community.

I would not only love to see better networking capability between African descended transpeople in our various communities come out of that, but also see some genuine friendship from from that as well.

A girl can dream can't she?

But what I would really like to see become a reality is the Black trans community having the same or better community infrastructure that our white sisters have, and do so by the end of the 2K1's.

And I know some of you would like to see that happen as well.
Posted by Monica Roberts at 1:00 AM