2010 Battle Of The Bluegrass 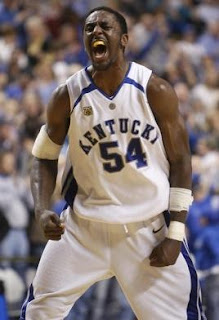 But it is basketball which fans the passionate flames of the Kentucky and Louisville faithful, and this date has been circled on the calendar ever since the basketball schedules for both schools were released.

It's a rivalry that is so big that it divides friends and families. The Louisville Courier-Journal and Lexington Herald-Leader not only print special sections in the paper but devotes space on their webpages just to cover it.

I'm no stranger to big rivalry games. I grew up watching the Texas Longhorns and Texas A&M Aggies Thanksgiving Day football hatefest. But this is a rivalry that makes the UT-Texas A&M one look wimpy in comparison.

I even get a taste of the rivalry here in the house. Wildcat fan Dawn and Cardinal fan Polar will be driving the 70 miles down I-64 east to take in the action at Rupp while wearing their respective school colors. 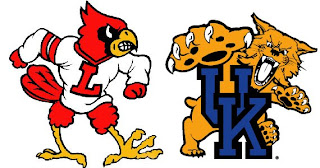 I like both teams and I'm neutral about which team I support as a Texan in exile. But this week the recruiting pitches from fans on both sides trying to get me to join Cats Nation or Cards Nation have been more intense than usual.

Televisions all across the state and a capacity Rupp Arena crowd will be on hand for the latest renewal of the Battle of the Bluegrass. The Number 3 ranked and 14-0 Wildcats will host the 10-3 Cards in Lexington. Kentucky has a 26-14 all time series lead but Louisville has won the last two games.

The Cats are flying high under new coach John Calipari and super freshman John Wall. Of course the UK fans are supremely confident they will win today's matchup that tips off at 3:30 PM EST. They are also popping their collars after becoming the first NCAA school to win 2000 games last month. 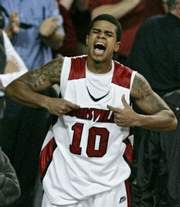 But Rick Pitino's Cards and their fans aren't backing down or caring that UK is a 7 point favorite going into this heavyweight basketball tilt. Anything can and does happen in rivalry games, and this one has had its share of fantastic finishes, great players, unsung heroes, and close games regardless of who was ranked at the time.

As former NFL coach and ESPN analyst Herman Edwards said, "That's why you play the games."