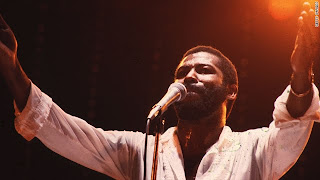 Was shocked to hear as I tuned in to the TJMS that Teddy Pendergrass, one of my favorite soul singers of the 70's and early 80's died Wednesday in his hometown of Philadelphia at age 59 after a long illness.

Teddy was born in Philadelphia on March 26, 1950 and started out his music career as a drummer. It wasn't long before we began hearing that sexy, powerful baritone voice on Harold Melvin and the Blue Notes songs such as their 1972 Number One hit 'If You Don't Know Me by Now'.

Teddy left the group to go solo and had a string of hits such as "I Don't Love You Anymore', 'Love THO', 'Turn out The Lights' and 'Close The Door'.

For the brothers of the late 70's, if you wanted some romantic attention from the ladies, Teddy Pendergrass' music or concert tickets became a requirement for setting the proper romantic mood. Teddy's music is probably responsible for many of the people who were born in the late 70's and early 80's being here.

Sisters back in the day loved them some Teddy and the 'Teddy Bear' loved them back. Teddy was one of the first artists to have 'For Ladies Only' concert tours that were sold out affairs.

I still chuckle about a 1980 Kool Jazz Festival I attended at the Dome with my uncle, brother and mom in which Rick James and Teddy were the highlight acts. We had floor seats twenty rows from the rotating stage, and five minutes into Teddy's set, two sexy sisters sweetly asked my uncle if they could borrow his binoculars because in their words, they wanted to see if Teddy had a big package.

As my Uncle Leo chuckled and handed over his binoculars, the stage rotated back in our direction. The first sister squealed in delight as her homegirl said 'Ooh girl, lemme see, lemme see' as panties started flying toward the stage.

In 1982 as Teddy's career was at its apex with him becoming an international superstar and sex symbol, Pendergrass and passenger Tenika Watson were involved in a near fatal Philadelphia car accident that left him paralyzed. 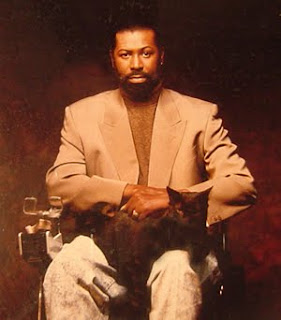 But Pendergrass returned to the studio in 1984 to record an album. That album featured a song in which a young female singer got her first recording opportunity.

That singer's name was Whitney Houston. Wonder what happened to her?

Teddy also did a lot of work through his Teddy Pendergrass Alliance founded in 1998 to help people suffering from spinal cord injuries.

But my feelings about Teddy are echoed by his son Teddy Pendergrass II.

"To all his fans who loved his music, thank you. He will live on through his music."

That he will. But another one of the legendary R&B singers has passed on.
Posted by Monica Roberts at 7:30 AM