While most of the planet's sports fans were waiting with breathless anticipation for the 2010 World Cup soccer draw in Cape Town, or in Canada were tracking the progress of the Olympic torch relay across their country, back on December 15 the draw setting up the groups for the 2010 FIBA World Championship for Men took place in Istanbul.

The draw determines the composition of the groups for the 24 teams participating in the August 28-September 12 tournament.

The 2008 Olympic champion USA will be in Group B, and will open group play in Istanbul August 28 against Croatia. The 2006 defending FIBA champions Spain will play in Group D and open defense of their title in Izmir versus France.

Our northern neighbors Canada also qualified for the 2010 field. They are in Group D and will playing their opening round match versus Lebanon.

Here are the groups for the 2010 FIBA World Championship For Men:

Group of Death so far looks like a toss up between Group A and Group C. 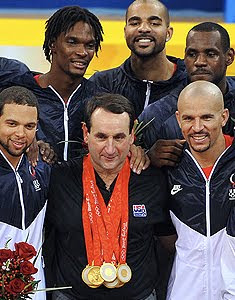 After the Group play round robin, the top four teams in each group advance to the knockout Eights round until the new FIBA champion is crowned.

The final composition of Team USA FIBA World Championships lineup hasn't been determined yet, but we already know who will coach them.

It's the same group of coaches that led Team USA to a 36-1 record in the last two year cycle.

Mike Krzyzewski will be back as Team USA's head coach along with his staff of Jim Boeheim, Mike D’Antoni and Nate McMillan.

Can't wait to find out not only which NBA ballers will be representing the USA as we reestablish our international basketball prominence, but for the action to start in Turkey as well.

The FIBA Championship winner is also playing for another prize. Winner gets the automatic qualifying spot for the 2012 London Olympics b-ball tournament.
Posted by Monica Roberts at 6:57 PM