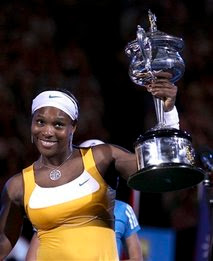 Serena captured her fifth Australian Open title to add to the 2010 doubles title she won with Big Sis. It is Serena's 12th Grand Slam title, tying her with Billie Jean King for sixth place on the all time women's Grand Slam champions list.

The fifth Australian open title is the most by any woman in the Open Tennis Era since 1968, surpassing the four held by Evonne Goolagong Cawley, Steffi Graf and Monica Seles.

The next targets on the all time women's Grand Slam champions list are Chris Evert and Martina Navratilova with 18 majors each. 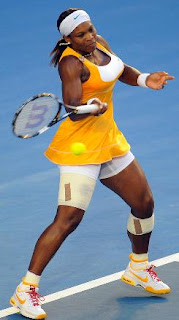 Margaret Court is the all time women's Grand Slam title holder with 24, and has won the Australian Open 11 times. She was in attendance along with Billie Jean King to be honored on the 40th anniversary year of her 1970 Grand Slam.

But Henin made Little Sis fight for it. At one point in the match she won 15 straight points to close out the second set, even the match and take a 1-0 lead in the deciding third set.

But Little Sis eventually stepped up her game to another level and took a 3-2 lead in the third set she never relinquished. She's also the first woman to repeat as champion since Jennifer Capriati won back to back Australian Opens in 2001-2002.

Now if Serena can figure out how to win some French Opens, everything will be copacetic.
Posted by Monica Roberts at 8:00 AM