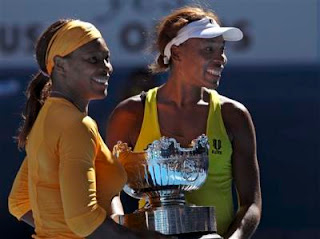 My favorite tennis playing sisters took three our of the four Grand Slam doubles titles they entered in 2009, with only the French Open eluding their grasp.

They began their quest to get that elusive doubles Grand Slam by beating the world number one ranked doubles team in Cara Black of Zimbabwe and Liezel Huber of the US 6-4 6-3 to successfully defend their Australian Open championship.

The Williams sisters won their first Australian Open doubles crown in 2001 and did so again in 2003 and last year. They have won 11 Grand Slam doubles titles over their careers.

Serena is seeking her 12 individual Grand slam title when she meets the unretired Justine Henin in a bid to do something she's never done in her career: Win an Australian Open singles title in an even numbered year.

Next Grand Slam for the Williams sisters is the French Open
Posted by Monica Roberts at 6:00 AM