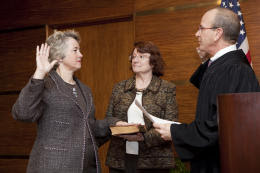 The arrival of the New Year meant that the day Houston's new mayor would take office was fast approaching.

In a Saturday private ceremony witnessed by her partner Kathy and a small group of her family and friends, Annise D. Parker was officially sworn in as my hometown's 61st mayor.

Longtime friend and former campaign manager State District Judge Steven Kirkland had the honor of administering the oath of office.

Mayor Parker used her grandparents’ Bible for that ceremony, and plans to do so again when she takes part in the public ceremony on Monday at the Wortham Theater Center.

According to a statement issued by the city, Parker kept Saturday’s swearing-in private to avoid overtime costs that would have incurred if police and other city employees were needed for a weekend inauguration. 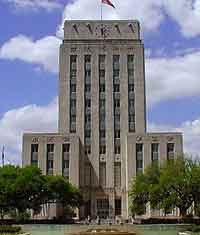 “At a time when the city is facing budget shortfalls, we will be continually looking for ways to cut expenses,” Parker said in a statement.

During the Monday inaugural festivities, she will take the oath again at 9:30 AM CST along with City Controller-elect Ronald Green and members of the Houston City Council.

As the Houston Chronicle noted and many of us who have watched her rise to the mayor's chair already know, the incoming mayor knows her way around City Hall.

She spent six years as an at-large council member and six more as city controller, years in which she was immersed in city finances and department audits, 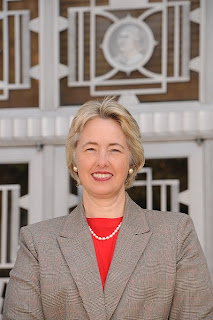 “We have someone with institutional knowledge in charge, someone who can recite 12 years of city policy-making off the top of her head,” said local political observer Nancy Sims. “This is truly unique since we adopted term limits.”

And it's that unique aspect which will serve her and the citizens of Houston well.

She also is a straight shooter, and plans to remind Houstonians during her inaugural speech that our city faces difficult choices.

“I'm not going to paint a rosy picture when that's not the truth,” she said. “I am by nature an optimist, but I believe that optimism has to go with hard work and commitment — you have to do the preparation — but Houstonians know how to do that. We'll get by, and things will be fine, but it's not going to be easy.”

But judging by your past work, Houston will be in good hands as you make the tough decisions that will help us get by.
Posted by Monica Roberts at 2:00 PM