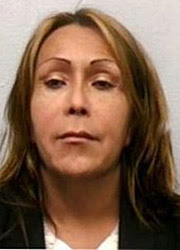 51 year old transwoman Myra Chanel Ical was found dead in the 4300 block of Garrott near Richmond Avenue back on January 10 at 2 PM CST.

But you wouldn't know that based on the way Houston Chronicle reporter Dale Lezon wrote the story.

As per longstanding TransGriot policy, I'm going to do the media's work for them and write the story to conform with AP Stylebook guidelines for reporting on Trans individuals.

Police are trying to determine why a transgender woman was killed and left half-naked in a field known to police as a hangout for prostitutes and drug users near the Montrose area.

She had numerous bruises and defensive wounds, as if she had struggled against her attacker. She was partially clothed.

Police said that the area where Ical's body was discovered is a well-known spot where homeless people camp and is frequented by prostitutes and drug users.

Investigators said they have no motive and no suspects in the death.

Anyone with information about the case is urged to contact the Houston Police Department Homicide Division at 713-308-3600 or Crime Stoppers at 713-222-TIPS.

Now Dale, was that so fracking hard to do?

On another note, for those of you in H-town there will be a candlelight vigil memorial service January 25 at the spot where Myra was found at 6 PM CST.
Posted by Monica Roberts at 11:00 PM

An equally important issue to name/pronouns is how the Houston media has repeatedly insinuated she was somehow involved in prostitution and drugs because her body was left in an area where that kind of activity occurred (mostly a homeless encampment). The Houston police have already stated they don't believe either drugs nor prostitution were aspects to this murder... so where are the media retractions?