I've always loved my Lone Star homegirl Kat's writing, and check out ENDABlog on a regular basis to see what she and the other great peeps writing there have to say on many pertinent issues of the day.

Well, this particular post which mentions a negro secretary of state candidate in Michigan caught my attention.

Check out one of the things Repugnican Paul Scott wants to do if he's elected to the job that's being vacated by current Secretary of State Terri Lynn Land (R).

I will make it a priority to ensure transgender individuals will not be allowed to change the sex on their driver’s license in any circumstance.

As if transpeople didn't have it hard enough in Michigan, this 'brother' and half term state rep is now demonizing transpeople and using us as a wedge issue in order to move up the electoral food chain and prove he's more 'conservative than thou'.

All he's proving is how transphobic he is. And the thing that's pissing me off is this person shares my ethnic heritage. But as Zora Neale Hurston once said. All my skinfolk ain't my kinfolk.

One major recurring problem we transpeople face is ID that doesn't match our presentation. Non matching ID can and has opened the door to anti-trans discrimination, and this conservafool has just openly stated that he would if elected make it policy to not allow ID changes for transpeople under ANY circumstances.

We need the ability to change our ID to match our gender presentation, not permanent prohibitions against doing so.

This is a concrete example of not only why many African-Americans can't stand Black conservatives and negro Republicans, we see you for the butt kissing Michael Steelesque sellouts you are.

Okay transpeeps and fair minded peeps in Michigan, y'all know what to do and it's breathtakingly simple. 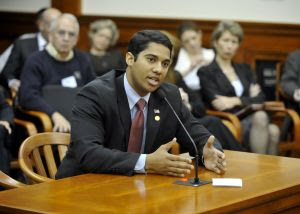 Make sure Scott never sees the secretary of state's chair.

If you can't knock his transphobic butt out in the primary, work your butts off to ensure he doesn't get elected this November by supporting his Democratic opponent. Let that Dem know upfront, be it Jocelyn Benson or whoever comes out of the Dem primary one of the reasons why you are supporting them so they don't forger why they're in that chair later.

After you deny Scott the Secretary of State's office, you then work to knock his transphobic behind out of the Michigan legislature.