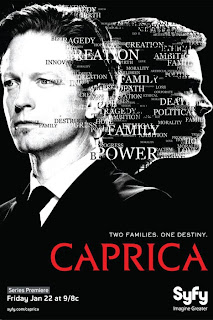 The day we Battlestar fans have been waiting for since our fave series found our Earth 150,000 years ago and went out on top in the ratings after four seasons is fast approaching.

While waiting for Caprica to start we BSG junkies have been teased with trailers and given a taste of Caprica thanks to last year's miniseries.

While there are some elements that are familiar to BSG viewers, this prequel takes place 58 years before the events of Battlestar Galactica in a technologically advanced world similar to our own planet.

The other thing that's an integral part of this series is the dawn of the Cylons weaved into the stories of two families, the Graystones and the Adamas. 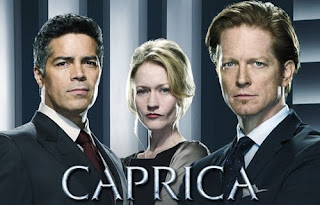 And while we do have a teenage William Adama, the future commander of the Battlestar Galactica appearing in this series, the other characters are specific to this series and this time period in the BSG storyline.

It's being produced by Ronald Moore and David Eick, the same team that brought us BSG as well.

In any case, looking forward to finally getting the chance to watch intelligently written TV again and being back in the BSG universe even though we know how this story is going to play out.