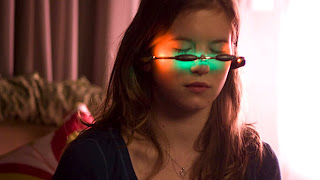 The night me and other Battlestar fans have been waiting for ever since the reimagined BSG ended and we got a taste of it in a miniseries is finally taking place.

We finally get to see the season premiere on SyFy of the Battlestar Galactica prequel series Caprica next week, but this weekend they reran the episode kicking off the show. The new episodes start next week.

There's even a website on SyFy that has a mock Caprican newspaper that you can leave comments on.

Every now and then you'll see one on the various posts from TauronMoni on it. ;)

While this one is set in the BSG universe, it's taking place 58 years before the events depicted in Battlestar Galactica.

I'm anxious to see how it will play out and looking forward to killing an hour in front of the TV watching it.
Posted by Monica Roberts at 8:00 PM