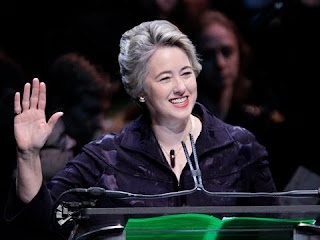 The public swearing in ceremony for new Houston Mayor Annise Parker took place today at the Wortham Theater Center with five of our previous mayors, Fred Hofheinz, Kathy Whitmire, Lee Brown, Bob Lanier and Bill White (the one she's succeeding) on the stage with her.

Due to regulations in the city charter, she was sworn in Saturday in a private ceremony to become our 61st mayor and only the second woman to hold the office.

It figures that Phred Phelps and 4 members of his Westboro Baptist Hate Church KKKlan would show up to picket today. They were countered by an even larger group picketing them. I hope the city disinfected and scrubbed down the sidewalk where the Phelps family was standing.

Congrats Madame Mayor. May you have much success and two more terms in the mayor's chair.
Posted by Monica Roberts at 3:54 PM