Trans Texans and our allies will be headed to Austin next Monday for the TransTexas Caucus and Lobby Day to combat four unjust anti-trans bills.

Two bills by Rep Gilbert Pena (R-Pasadena) seek to not only incentivize kids snitching on and bullying their trans classmates for using the restroom (HB 2801 and 2802), we also have to combat Debbie Does Discrimination Riddle's (R-Tomball) HB 1748 and HB 1749 that seek to criminalize the existence of transpeople in Texas by not only making it a crime for Moni and every trans Texan to go to the restroom, it will penalize organizations and companies that allow us to do so. 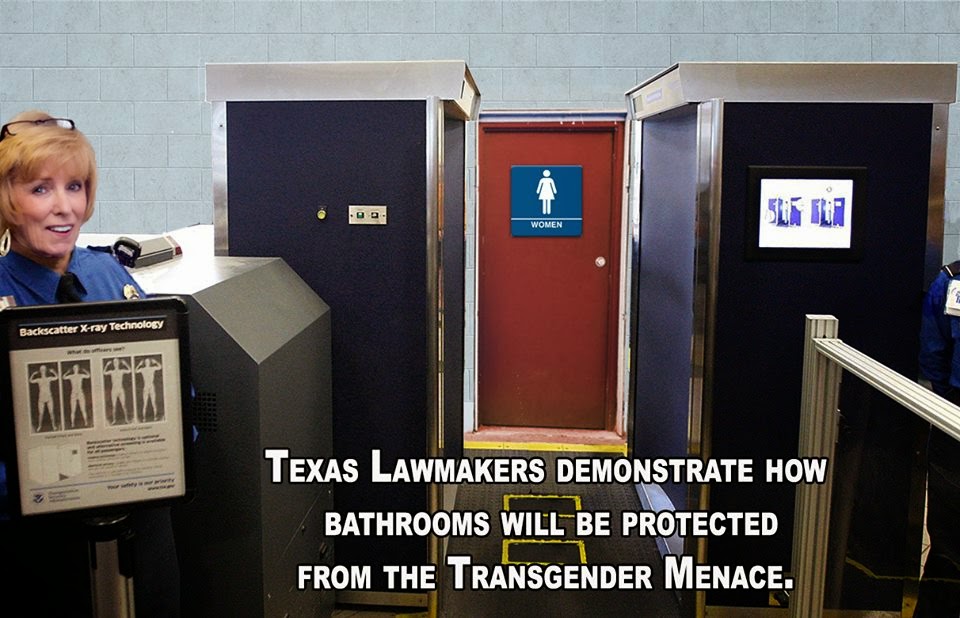 This is unacceptable, and all four of those unjust anti-trans bills need to die, especially since they were written in retaliation for Houston and Plano's passage of human rights legislation that protects trans Texans.

There is also a trans bill we can support, and that is Rep. Garnet Coleman's HB 2058. If passed, it would create a statewide standard process for correct gender markers across the Lone Star State.

Rep. Coleman's bill is also in the State Affairs committee.

That's why on Sunday April 26, there will be a caucus held in Austin prior to us hitting the state capitol to discuss issues of importance to the Texas transgender community.  The next day, April 27, we will head to the Pink Dome to lobby against those bills and tell our state legislators why it is a horrible idea and bad for business to legislate discrimination against trans Texans.

You can sign up for the caucus, lobby day or to attend both by clicking this link.

We will also be telling our state legislators why standardizing the process for changing gender markers as HB 2058 would do is good for all Texans.

All four of the anti-trans bills have been assigned to the State Affairs Committee, and HB 2801 has  an upcoming hearing on April 22 before we get to Austin.

So please take a moment to be an agent of our transkids liberation and call your state legislators to urge them to oppose HB 2801 and all the anti-trans bills by Pena and Riddle, and support Rep Coleman's HB 2058.

The lobby day is being organized by the Transgender Education Network of Texas (TENT) and is being co-sponsored by Equality Texas, the Texas Freedom Network, the Transgender Law Center, HRC and several other orgs.

It is so important to me I'm delaying my trip to BTAC by a day so I can attend the lobby day.

I will be in Austin for the third time this session to stand up for my human rights as a proud trans Texan.  If you can do so, I hope you will join me.   For those of you who live too far away in our ginormous state to make that trip, you can support us by calling or e-mailing your state legislator.
Posted by Monica Roberts at 12:00 AM