I was in the house Thursday when the problematic unveiling of this year's Houston Pride Grand Marshals happened, and expressed myself (and as I've been hearing privately) and the sentiments of much of Black LGBT Houston and our allies in a post.

Some of y'all can roll your eyes all you wish, but we have a problem when in this diverse city, it has been 22 years since the last African-American female was elected Houston Pride Grand Marshal on the feminine side in Rev. Carolyn Mobley, and I'll have to go through the historical record to find out when the last African-American male was elected.

So since I brought up the fact we have a problem, I'm going to suggest a possible solution for it. 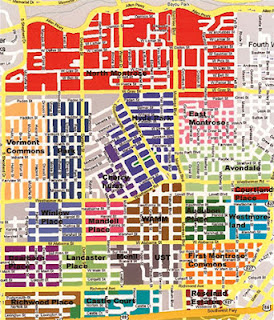 For starters, you have to bear in mind that not everyone in LGBT Houston lives in Montrose.   If you're publicizing it in the traditional gay print media sources like OutSmart, the Montrose Gem, et cetera, those don't get distributed to neighborhoods of color.

You also have to take into account not everyone goes to a gay club or the Montrose Center, where those gay print publications are accessible for pickup.

Yes, you could go to TBLG friendly sites like Project Q and TransGriot, KPFT-FM, post it on the Pride Facebook page, Twitter feed and other social media outlets, but once again, not everyone is on the Net, or in many cases aware of what's happening in Houston's LGBT community for a variety of reasons.

Now here's my suggested proposal, and it's an idea that JD Doyle and I were discussing a few days ago.

First order of business is that the Pride Committee must become more diverse, not only ethically, but class wise as well.   It's a red flag when Houston Pride is cricket chirping silent about a human rights ordinance (HERO) that will benefit the entire Houston trans, bi and SGL community.

The male and female Grand Marshal can remain a Houston areawide election process, but steps have to be taken to ensure that LGBT communities of color have a fair shot in selecting them.   Use the newly created Diversity Committee to select elective marshal candidates from across our diverse Houston BTLG community, and give the Diversity Committee the power and responsibility of adding two to four marshals from communities of color when the elective process fails.

Once those Grand Marshal candidates are selected, announce those elective candidates and the voting period dates at a Pride Perspective community meeting, on social media, and on KPFT-FM's Queer Voices.

That's my suggestions on the subject, and here's hoping that Pride Houston will engage in some hard solid thinking on the subject that will result next year in a more diverse group of Pride Parade Grand Marshals.
Posted by Monica Roberts at 9:30 AM

Who is on the PrideHouston diversity committee, when do they meet, are their meetings publicized, and are they open to the public?