The 2015 NFL officials pool will have a groundbreaking member added to it in Sarah Thomas, who was recently hired as the NFL's first ever full time female official

The 41 year old Thomas is a mother of three and pharmaceutical sales rep when she's not on the gridiron, and growing up played softball and basketball.   She began her officiating career at the high school level in Mississippi and by 1996 was officiating at the Division I-A level in the state. 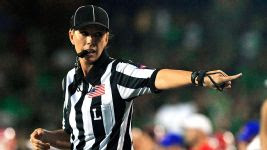 At that  time, the NFL wasn't the goal, but by 2007 Thomas was working games at the collegiate level in Conference USA.   In 2009 she became the first woman to officiate a college bowl game, the Little Caesar's Pizza Bowl, and has worked the Senior Bowl, the Fight Hunger Bowl, and the Medal of Honor Bowl in addition to the C-USA Championship Games in 2010 and 2014.

She also worked two seasons as an official in the defunct United Football League.

In 2011 she became the first woman to officiate a game in a Big Ten stadium when Rice played Northwestern,, and was in the NFL's officiating development program in 2013-14 working NFL preseason games, minicamps, and training camps.

"My goal has always been to be the best line judge I can be any time I get the opportunity,"said Thomas at a Wednesday press conference. "I feel honored and blessed to be in the National Football League now."

Thomas won't be the first woman to work an NFL regular season game.  That honor went to Shannon Eastin, who was called up during the 2012 NFL officials lockout and worked preseason and regular season NFL games until the lockout ended.

While Thomas is downplaying her role in sports history, it's still a big deal to a league which is decades behind the NBA, Major League Baseball and FIFA when it comes to having female officials calling their games.
Posted by Monica Roberts at 12:00 AM