"Councilmember Taylor, you are a coward who gave in to fear and prejudice, and your NO vote is irrefutable evidence of that.  You let 'fear and smear' tactics deter you from being a drum majorette for justice. "
TransGriot, June 22, 2014

Remember when I was worried about Ivy Taylor getting a shot at the San Antonio mayor's chair in the wake of Mayor Julian Castro's appointment to become HUD Secretary?

After making a bunch of promises, including not running for the seat and not repealing the hard won  LGBT protective ordinance passed back in September 2013 of which she was  one of the NO votes, she was appointed by council over the objections of San Antonio's TBLG community and our allies to fill Mayor Castro's unexpired term.   In the process, she became the first African-American mayor of San Antonio.

It also turned out the reservations of the San Antonio LGBT community, their allies and yours truly had were justified.    She's reneged on the promise of running for the mayor's chair, and has caused a political firestorm in the Alamo City by saying at a April 20 candidate forum that the LGBT protections she voted NO against are 'a waste of time'

Taylor said at the Cornerstone Church forum she voted with her conscience , and  year and a half later, still stands by her loud and wrong decision.

“I did not feel we should have even been debating that issue,” she said. “I thought it was a waste of time.

Seriously?  Did you even pay attention in history class?  Human rights legislation is never 'a waste of time', and any African-American politician stupid enough to say that doesn't deserve to be in elective office.

She has also repeatedly pissed off the San Antonio BTLG community by no-showing a March 22 Stonewall candidate forum,  called the San Antonio NDO 'a political stunt, frustrated her own LGBT Advisory Committee appointed in October by refusing to meet with them until recently, and found herself being booed at another forum after blaming advocates of the NDO for not leading efforts to propose enforcement mechanisms 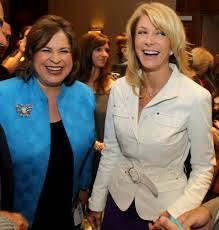 But in a city that is heavily Latino, with two popular Latino candidates in Van de Putte and Villarreal splitting votes, even though  Taylor has been pissing people off in the Alamo City, don't be surprised if she gets enough votes from Anglos and the 7% African-American population to get her to a runoff.

But if she doesn't make the mayoral runoff,she'll be gone from the mayor's chair and city council, and it can't happen fast enough for the San Antonio TBLG community and our allies.
Posted by Monica Roberts at 8:30 AM