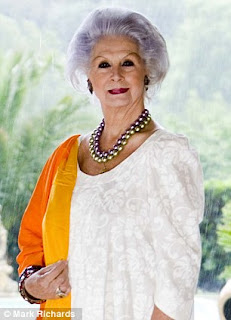 Across The Pond today is the milestone birthday of one of our trans community icons.  Today April Ashley, MBE was born on this date 80 years ago in Liverpool, England.

No wonder I love her.   She's a fellow Taurus!

She had a challenging childhood and grew up to become one of the first people in Great Britain to undergo SRS with Dr. Georges Bourou in Casablanca, Morocco in 1960.

She was a Vogue fashion model, worked at the famed LeCarrousel trans club in Paris in which she rubbed elbows with Ernest Hemingway, Jean Paul Sartre and Bob Hope, was an actress, and enjoyed the romantic attention of actor Peter O'Toole and famed painters Salvador Dali and Pablo Picasso.

She has also worked tirelessly to advance the human rights of trans people in Great Britain and awarded her MBE in 2012.

In September 2013 the year long April Ashley: Portrait of A Lady exhibit opened at the Museum of Liverpool focused on her amazing life.

Happy 80th birthday, April!   To me. April Ashley's life is a testament to living well being your best revenge as a trans person.

And living long enough to celebrate eight decades on this planet definitely qualifies as living well.