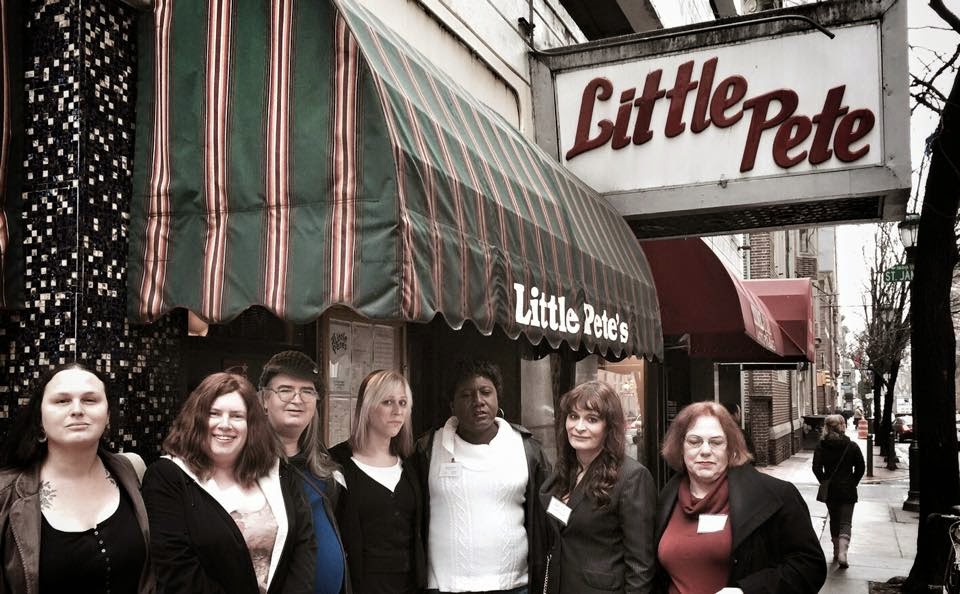 50 years ago today an event took place in Philadelphia that was not only a protest that was focused on gender variant issues, it was one kicked off by African-American gender variant people.

The flashpoint of this protest that took place starting today and through May 1965 was a 24 hour Philadelphia diner and coffee shop called Dewey's Lunch Counter.  (now Little Pete's)

In 1965 the Dewey's location on S. 17th St. across the street from our hotel that me and several friends took the picture in front of during the recent LGBT Media Journalists Convening back in March was a popular late night hangout for the African American gender variant teens who hung out in the nearby Philadelphia gay clubs.

The ownership of Dewey's, transphobically concerned the predominately LGBT clientele at this location were driving away straight customers, declared that people not in gender appropriate attire would not be served.

This happening during the middle of African-American civil rights movement meant it was on like Donkey Kong, and on April 25, 1965, more than 150 kids showed up at Dewey's in 'non conformist clothing ' in protest of the transphobic policy..

They were denied service by Dewey's management,  and two male and one female teen refused to leave Dewey's after being denied service.   They were arrested by Philadelphia police officers along with a gay activist advising them of their legal rights, charged and later found guilty of misdemeanor disorderly conduct..

That jumped off a sit in and informational picket of Dewey's that lasted until the second sit in on May 2.   Following that second sit in protest, the Dewey's management backed down and began an immediate cessation of indiscriminate denials of service.

I've had to fight tooth and nail the attempted gaywashing and whitewashing of this predominately gender variant African-American protest that occurred four years before Stonewall, organized on 1960's Civil Rights Movement principles, and one of the examples of a protest organized about and centered on transgender issues.

These are the people whose shoulders I stand on as a proud African-American trans person, and it was wonderful to know this is part of our history that I get to share with others.

And I hope that the city of Philadelphia will be celebrating what happened at that location today.

TransGriot Note:  Been notified by Christopher Bartlett there  will be a 50th anniversary commemoration of the sit in at 10:30 PM EDT ay Little Pete's (the current incarnation of Dewey's Lunch Counter)   Location is 219 S. 17th Street in Philadelphia.