50th Anniversary Of The Astrodome Opening 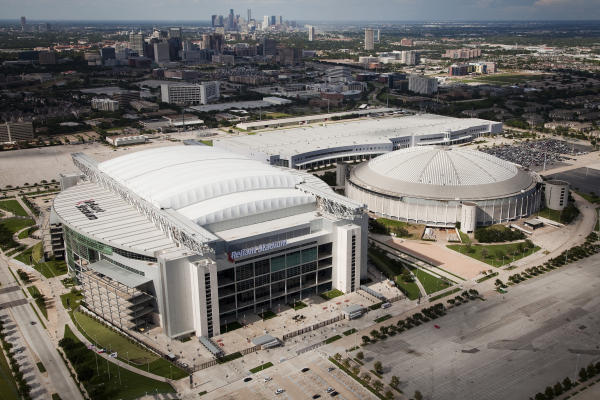 It's been long since overshadowed by the 2002 opening of NRG Stadium, but fifty years ago on this date the Harris County Domed Stadium, better known to the rest of you peeps as the Astrodome, opened as the world's first multi-purpose domed stadium.

'The Eighth Wonder Of The World' was an iconic part of my childhood as I not only attended Astros baseball, Oilers, UH Cougars and TSU Tigers football games in its cavernous space, but  the Houston Livestock Show and Rodeo, Texas high school football playoff games, concerts and other events also happened there.

I even worked at the Dome's concessions company for several years during college from 1981-1986.

The Astrodome was the dream of Judge Roy Hofheinz, who conceptualized it as early as 1952.   When Houston was granted a National League expansion franchise in 1960 that started play in 1962 as the Colt .45's, it was after the Hofheinz led expansion group promised to build a covered stadium to deal with our blast furnace summers.

Construction on the Dome began on January 3, 1962 and was completed ahead of schedule in November 1964.

It opened on this date with a sold out exhibition game between the Astros and the New York Yankees attended by President Lyndon Johnson and the First Lady, Texas Governor John Connally, and Houston Mayor Louie Welch.

The Dome would host the nationally televised 1968 'Game of The Century' between the University of Houston and UCLA that not only established a college basketball attendance record that wasn't broken until 2003, it set the stage for March Madness and proved college basketball had a viable TV audience.

The 1973 'Battle of The Sexes' tennis match between Bobby Riggs and Billie Jean King was also played there, and as many of you are aware, the 1992 GOP National 'Culture War' convention nominated President George HW Bush was  also hosted under its domed roof.

One of my fave Dome events was the 1980 Luv Ya Blue pep rally that happened after the Oilers controversial 27-13 AFC championship game loss to the Pittsburgh Steelers.  After my father dropped me off on the Fannin Street side of the stadium, I had to climb the locked seven foot barbed wire topped security fence surrounding the Astrodome perimeter and got inside the stadium just before the fire marshal ordered no more people be allowed in because it was beyond capacity.

I still had a memorable evening despite all that work to get in there.

I also enjoyed it when I got to go to the Astrodome for TSU games.  Because my dad was the Tigers radio play by play announcer, I got to sit in the press box, act as a spotter during the game, and enjoy the press level cafeteria with its delicious food and bottomless soda cups as the Tigers engaged in gridiron battles against their SWAC foes.

And yes, there was one day I was working at the Dome during a high school football doubleheader that involved the (boo hiss) Jack Yates Lions.

As I was sitting outside the concession stand I managed at the Dome's west gate taking a break, three young flamboyant Black drag queens on hormones sashayed through the crowd

A cluster of ten kids were following them laughing as they paid it no mind until they got to where I was sitting with one of the HPD cops working security.  Stuff got real as sistah girl's wig got snatched off her head and they had to start chasing the wig thieves playing keep away with it as they ran down the ramp to the lower level

We;re still trying to figure out how to repurpose it so it is around for another generation of Houstonians.   So on the 50th anniversary of its opening, the Dome will be opened for a birthday celebration starting at 6 PM.    It was added to the National Register of Historic Places last year so it doesn't suffer the fate of the Kingdome, the Hubert H Humphrey Metrodome and the RCA Dome.

But I'm going so I can once again even if just for a moment, stand inside the stadium that triggered so many childhood memories for me and hundreds of thousands of Houstonians.
Posted by Monica Roberts at 9:30 AM