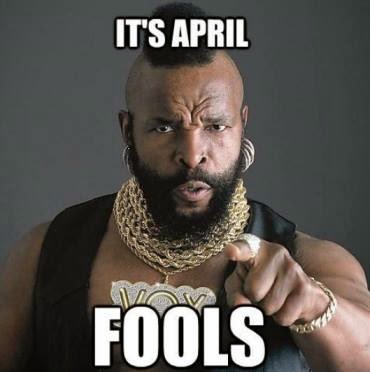 Yep it is April, it's Friday, and time for you fave feature on TransGriot in the Shut Up Fool Awards.

I get to call out the fool, fools or group of fools who need to have the bright spotlight of scrutiny shined upon the stupid, hypocritical and WTF head scratching crap they do and say.

Let's get started with this week's cavalcade of fools shall we?

Honorable mention number one is Ben Carson.   After he remembered he was Black earlier and called the murder by po-po of Walter Scott 'an execution on the streets', he had to go back to cooning it up for conservamassa and let fly with the ridiculous claim that 'gays are better protected than Christians'

I repeat, where is the DROP Squad when you need them?

Honorable mention number two is Ted Nugent.   Ted parted his lips to let something stupid fly out of them again by claiming he's being 'persecuted for doing God's work'.

Naw Ted, you're doing somebody's work alright.  Who could it be?

Honorable mention number three is Rand Paul, who is already fracking up in his newly declared presidential run by getting testy with CNBC anchor Savannah Guthrie when she started asking him tough questions about policy flip flops  that he obviously didn't want to answer.

Oh Randall, just a word of advice.  Attacking a female anchor trying to do her job is not a good look for you in the eyes of independent and moderate voters.

Honorable mention number four is Tom DeLay.  He popped up on Newsmax to defend the 'Religious Freedom Discrimination bills by saying that we must fight for those 'with every ounce of our being.'

And I'm going to fight those unjust bills to ensure they don't become law in this state.

No wonder Hewlett-Packard tanked under your misleadership

Honorable mention number six is a group award for the NRA.  Their convention is kicking off in Nashville, and the NRA ammosexuals that are trying to push open carry laws, put guns in your kids elementary schools and on college campuses, won't allow loaded firearms for safety reasons at their convention hall.

Can you say hypocrites TransGriot boys and girls?   Thought you could.

This week's Shut Up Fool winner I have to go local for it in Dave Wilson.

For several months the longtime hatemonger has been trying to gather enough signatures to push an anti-trans charter amendment onto the 2015 city election ballot.   With great fanfare he showed up at City Hall with news cameras rolling, turned in six boxes of petitions  and claimed he'd gotten 19.700 signatures.

However, since this is a charter amendment, the threshold under Texas state law is 20,000 VALID signatures.

Oops.   Thank the Lord my right-wing opposition here is inept at times.   If they had even half the brains of the FOX Fembots, they'd be more problematic to deal with.

He huffed and puffed about filing a lawsuit to force it on the ballot, but the end result is he has to start over.

Yo HCC, can't y'all find a way to kick this hater off your board?