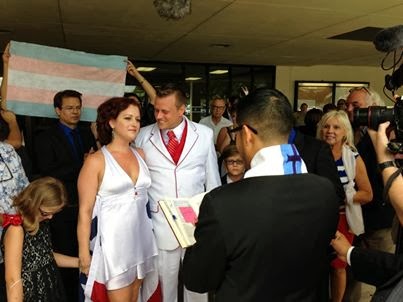 It's Valentine's Day 2014, and for you folks who are booed up, I ain't mad at you.   Hope they are treating you with all the love and respect you deserve and are getting all the TLC you can stand.

And conversely, appreciate and treasure every millisecond of it, because there are us single folks who aren't so lucky.

Despite being single (again) on this day for lovers, I'm not depressed about it.  I'm feeling a lot of elation in terms of the early V-Day present Texas transpeeps received from Chief Justice Rogelio Valdez in overturning that odious 2011 ruling in Nikki Araguz Loyd's trans marriage case and seeing those unjust anti-same sex marriage amendments go down in flames in one state after another.

And the Texas LGBT community has its eyes focused on federal courtrooms in San Antonio and Austin for two cases that may strike critical blows against Texas' unjust constitutional ban on same-sex marriage.

Even Kentucky got in on the fun when a judge ruled the state had to recognize same-sex marriages legally performed out of state.   So it looks like the marriage train is picking up momentum.

But Valentine's Day can still be hard on a single person having to interact with all the people who are coupled.  You flip the channels and see dozens of romance movies being broadcast along with the glut of TV commercials with happy couples on them.  You flip on the radio and hear romantic ballads being crooned.

And then you look at your wall, see the February 14 date on the calendar and yell, "I hate Valentine's Day!"

And as I continue to joke, I've been wandering the dating Sinai for so long the Israelites walk past me and shake their heads as they head to the dating Promised Land.

Will it happen for me this year? Who knows?  I'm just at the point in my life now that if it is meant to happen for me it will, and if it doesn't, then I'm not obsessing about it.

Happy Valentine's Day 'errbody'!
Posted by Monica Roberts at 1:30 AM