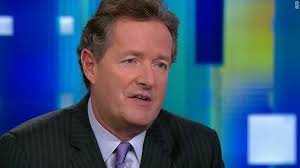 As I like to say, Karma is not only a you know what, but wears a dress and stiletto heels.

I am posting my remix of the saying about karma to giddily post the news that CNN is pulling the plug on Piers Morgan's consistently low rated show that was facing the double whammy competing in that time slot against Megyn Kelly on FOX Noise and Rachel Maddow on MSNBC.

And after the jacked up interview with Janet Mock and his continued attacks on her and other trans activists, I care even less about him and his show.

CNN is planning on keeping his around the network in some other capacity (why?) but as far as I'm concerned, Piers Morgan needs to have a Georgia Dome full of seats and a nice tall glass of STFU.
Posted by Monica Roberts at 7:30 PM