Sad and surprising news coming out of North Carolina as my blogging shero Pam Spaulding announced that after nine years, she is shutting down her groundbreaking and award winning Pam's House Blend blog July 1.

Pam's blog along with the November 2005 kick in the butt from Jordana LeSesne were some of the motivating reasons I decided to get off the fence about it and found TransGriot back in January 2006.  One of the first blogs to link to the neophyte TransGriot and give it an initial traffic and signal boost was Pam's House Blend.

As a fellow red stater and African-American I appreciated her thought provoking views and perspectives on the LGBT movement and other subjects and loved the fact she wasn't 'scurred' to talk about race and class issues inside the community either.

During the life of the Black Blog Rankings that Wayne Hicks of Electronic Villager compiled, Pam's House Blend quickly rose to the number one spot in them and stayed there for 15 months until the Villager shut it down in October 2009. 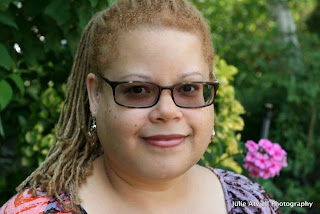 People marvel and talk about when I meet them the pace that I crank out posts here at TransGriot but Pam made me look like a slacker. There were days where she would have as many as ten posts up in a single day to my mere three or more as the news cycle dictates and many of them were long form ones.

Pam was running the Blend, up late writing and traveling to conferences across the country while holding down a full time non LGBT activism related job and battling ongoing health issues.

I had the pleasure of finally meeting her and one of her baristas Alvin McEwen during Netroots Nation in Providence last year and spent an enjoyable and hilarious at times few days hanging with them.

She said in her post she's not disappearing from the scene entirely, and that good news. “I’ll continue to be active on social media and make time to mentor folks as I can. It’s just time for someone else to pick up the ball and run with the daily activist grind, and forge new ground in an ever-shifting new media.”

Pam, while I'm going to miss surfing over to the Blend on a regular basis, best of luck and megasuccess in whatever you decide to do from this point forward.

Also looking forward to the next time I get to spend some quality time in your presence.
Posted by Monica Roberts at 12:00 AM