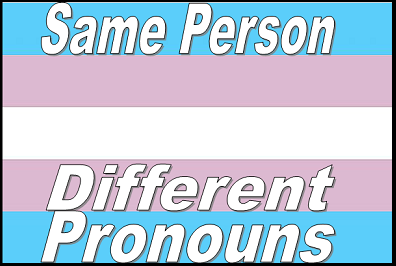 Now that we are about to go into the summer season with family reunions, weddings, barbecues (and hopefully no funerals) on the horizon, one of the things that we transpeople dread when we interact in those family situations is having the relative who refuses to respect that the trans woman playing volleyball against your side or the trans man getting that barbecue plate and playing dominoes deserves the same respect that you give the other cis men and cis women of the family.

Failing to do so not only is disrespectful to them and hurts their feelings, but can also open them up to anti-trans discrimination or trans hate violence if the wrong ears hear your comment.

Sabrina Samone at TransMusePlanet has another timely post about the necessity of using correct pronouns with your trans relatives even if you're having a problem sorting out your trans issues with them.

It's entitled 'A Message To Families Of Transgender People: The Importance Of Being Pronoun PC' and here's a taste of it:

Most Trans people know of that one person or more within your family, on your job or simply a neighbor, that refuses to acknowledge or give the respect of the gender that is presented before them. Just because you may know the biological gender of your Trans family member don’t assume strangers know as well, more than likely they don’t. For years, some in my family, I’ve excused them, trying to realize it takes time for those around you to adjust to your new presentation. For everyone involved it’s a learning and growing experience, but after years now it’s just blatant dis respect and  an attempt to be transphobic and belittle me. Occasionally, within all family gatherings I may or may not take the time to remind you to use the proper pronoun of what you see before you, but on a recent trip it was an obvious attempt to be hateful by a blood relative.


Here's the rest of Sabrina's post over at TMP.
Posted by Monica Roberts at 12:00 AM